Which artists would you consider the funkiest in regards to jazz? Hmmm … I’ll step out on a limb and say it’s keyboardist George Duke! His record “Faces In Reflection,” is a prime example of his passion to step out of the box to explore the not so ordinary elements of jazz, funk, rock and mess them together into once appetizing blend of music .

Pissed, please don’t tell anyone but somehow I over looked this gem back in 1974. Forgive me, this one escaped my finger tips … it’s never to late to rediscover music you’ve missed along the way! J. Desmond/The Urban Flux 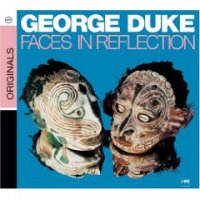 Although pianist George Duke later became known for his crossover and pop work, his jazz albums from the 1970s are all worthy entries as well. A fiery excursion into fusion, funk, and soul-jazz, 1974’s FACES IN REFLECTION is a case in point. …    Full DescriptionPrior to this session, Duke had been playing regularly with both Cannonball Adderley and Frank Zappa, and the influence of those artists can be heard in Duke’s hard-swinging blues and wild, wooly experimentation. Even though synthesizers play a prominent role on these tracks, FACES IN REFLECTION rarely sounds dated; Duke uses electric and acoustic keys to push his Latin, soul, and jazz grooves to new heights. Bassist John Heard and drummer Leon Ndugu Chancellor make up the first-rate rhythm section. – CDUniverse.com