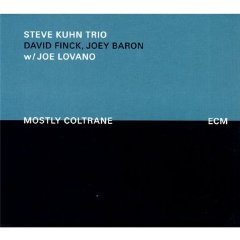 A celebration of the magisterial music of John Coltrane. In 1960 Steve Kuhn was the original pianist in John Coltrane’s quartet, preceding McCoy Tyner. The album is an homage to Coltrane’s music and influence, focusing on music either written by him or strongly associated with him. Particularly fascinating is the scope of material selected, which not only includes tunes Kuhn once played with Coltrane – “Central Park West“, “The Night Has A Thousand Eyes“, “I Want To Talk About You” – but goes right through Coltrane’s life, including pieces from the very final months, such as “Configuration” and “Jimmy’s Mode“…