The Way They Make Me Feel, A Collection of Tunes from the Songbooks of Michel Legrand, Henry Mancini and Johnny Mandel! 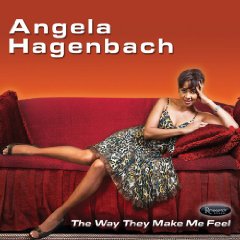 For Angela Hagenbach’s debut album on Resonance Records, The Way They Make Me Feel, producer George Klabin devised a unique approach: most contemporary jazz vocal albums are a hodge podge of various songs by different writers, while others are songbooks devoted to a single composer or lyricist. The Way They Make Me Feel, contrastingly, combines the best songs of three venerated musical giants whose work collectively defines a key era of American music: Michel Legrand, Henry Mancini, and Johnny Mandel. Hagenbach reports that Klabin thought of the album title – a play on the Legrand classic “The Way He Makes Me Feel” (from Yentl) even before the two of them had finished selecting the songs. Pre-selecting the title was a new approach for the Kansas City-based singer who served as producer and AR director on each of her five previous albums for her own label, Amazon Records® “My methods are quite different,” she says, “yet each of my projects has its own uniqueness. I’m certainly pleased with the results of this debut.“

The works of these three melodic masters are perfect for the widely-acclaimed jazz singer, who sings in a dark sultry voice, by turns seductive and swinging – sometimes even both at once. From the funky backbeats of “Cinnamon and Clove” to the rich, European atmosphere of “Charade,” to the epic grandeur of “Summer Me, Winter Me” and the intimacy of “His Eyes, Her Eyes,” Hagenbach and her musical arrangers, Tamir Hendelman and Kuno Schmid, cover a wide range of feelings, grooves, and emotional moods.

Hagenbach tells us, “I’ve been a huge fan of these three composers for a long time and have performed many of their songs over the years. She notes that,” in addition to being masters of their art, their music has crossed over many genres – from show tunes to film scores or TV show themes. These songs are entirely adaptable to the jazz idiom because they are so well written. They’ve not only become landmark works in the American songbook but also traditional jazz standards.”

Apart from a shared history in Hollywood – all three composers have won Academy Awards – Michel Legrand, Johnny Mandel, and the late Henry Mancini each have a knack for telling stories that speak to Hagenbach. “I’m a vocalist with the heart of a poet,” she says, “I love a good story and I like to remain free to whatever the story, the melody, and the arrangement suggests to me.” She adds that her own experience as a songwriter has helped her sharpen her abilities to interpret lyrics and music written by others. “I have a wealth of stories of my own to tell and am still perfecting the knack of speaking my mind and heart with ever so few words, lyrically speaking. Musically, I’m very big on melody. If you’ve got a great melody, the changes will follow. Mandel, Mancini, and Legrand are masters of this style of composing and the lyricists for each of the compositions are exquisite and they beautifully enhance the message with few cleverly chosen lyrics.”

George initially came up with a list of 18 great songs by these three iconic composers. Of these, Angela selected ten and suggested ‘Cinnamon and Clove.’ “I have a passion for Brazilian rhythms and could not resist this chart. I was unfamiliar with it and only stumbled upon it while researching the Mandel Songbook.”

Tamir Hendelman and Kuno Schmid both share the duty as pianist and musical director on this record. Hendelman, who recently played on Barbra Streisand’s 2009 CD, Love Is The Answer, played piano on and arranged five selections for Hagenbach. Schmid played piano and arranged the five-string section tracks heard on roughly half the album, and on the straight-ahead “Sure As You’re Born.” Hagenbach describes her two musical directors here, as “fantastic pianists and arrangers.”

Prior to the sessions, she conferred with the two of them by long distance, principally telephone and email. Thanks to the wonders of modern technology, Hagenbach was able to hear MIDI blueprints of the charts (which were then recorded with actual acoustic musicians for the album itself) in advance and gave Tamir and Kuno her feedback. Among other things, she liked Klabin’s idea to utilize an accordion to provide proper atmosphere for the French melodies of M. Legrand, which led to Tamir and George putting a call in to “the wonderful Frank Marocco.” But, she adds, “I can’t single Frank out without mentioning the others. All the musicians were fantastic! So musical and witty and just a delight to be creating music with.”

The set gets underway with a comparatively rare song by Johnny Mandel, “Cinnamon and Clove,” most famously recorded, up to now, as an instrumental by tenor great Zoot Sims. Angela notes that in addition to having a Brazilian beat, Mandel’s melody is deceptive: the second A section is an octave lower than the first and has a built in tag. Then the bridge comes in so quickly that a singer less sure-footed than Hagenbach would surely be thrown – instead she cut the whole thing in one take that satisfied George and Kuno so thoroughly, that they didn’t even feel the need for another try. Says Angela, “what a great composition! And the imagery the Bergmans conjured up lyrically was more than I could pass up. I just had to include this one. I was surprised by Tamir’s intro – I was expecting a samba, and he delivered a New Orleans parade beat! But in the end, I got my samba, and it all worked out superbly. Tamir is wonderful and Steve Wilkerson’s burning sax solo seals the deal.”

Angela describes Michel Legrand’s “The Way He Makes Me Feel” – also with lyrics by Alan and Marilyn Bergman – as “An epic ballad if there ever was one. This melody is both worldly and timid all at once, and I love what Kuno did with it.” A rare jazz treatment of one of the songs from the majestic Legrand-Bergman score to Yentl, Hagenbach and Schmid took considerable liberties with the song – for instance, they decided to concentrate on just one central part of the piece, rather than the whole, longish thing as heard in the film. Angela notes that, “The gorgeous swelling of the arrangement beautifully captures the heart of the piece, and although Kuno’s tinkling piano solo is only eight bars long, it still has that grand yet intimate scope.”

Johnny Mandel’s “Sure as You’re Born” is the only quartet number on the album and the only one to employ electronic keyboard and bass. She’s rightfully proud of it in that “for the most part it’s a head arrangement with the exception of the intro into the head (or tempo) and the ending. Kuno did another fine job here, and it’s a complete departure from his string arrangements. What a fun romp.”

Likewise, of the Mandel-Paul Williams standard “Close Enough for Love,” Hagenbach reports, “I love the pensive intro – Steve Wilkerson on clarinet – and the way Tamir’s arrangement enhances the emotional give and take of the story by flowing in and out of different time signatures and feels: a straight four to a bolero to a waltz and back again. I love the way Frank Marocco punctuates my delivery with his accordion.”

Angela Hagenbach has been based in Kansas City for most of her career. She was twice chosen to represent the United States as a Jazz Ambassador to the world under the auspices of the United States Information Agency and the Kennedy Center for the Performing Arts. She has worked and recorded with Clark Terry, Jimmy Heath, Russell Malone, Frank Foster and others. Two of her original compositions will be featured in Last Will, a 2010 film release, starring Tom Berenger and Tatum O’Neal. Angela is widely known as a masterful interpreter of great songs written by everyone from Duke Ellington to Antonio Carlos Jobim, as well as an acclaimed writer of original songs herself. This is her sixth album.

For further information on this and other Resonance Records releases, visit www.ResonanceRecords.org