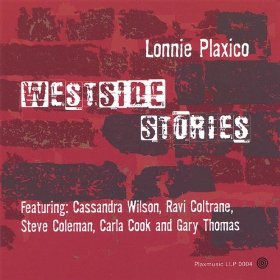 LONNIE PLAXICO Bassist, Composer, Producer the middle child in a family of musicians, Chicago-born Lonnie Plaxico inherited a gift for music that was discovered and nurtured early. By the age of twelve he had taught himself to play the electric bass, and he was soon venturing into Chicago’s music scene, renowned for its mix of jazz, funk and blues. It was not long before the young musician made his first recording, featuring his family’s band. At the age of fourteen, having already performed alongside several prominent Chicago jazz figures, Lonnie Plaxico turned professional, playing the electric and acoustic basses with equal facility.

In 1980 Plaxico moved to New York and soon began to appear with such artists as Chet Baker, Dexter Gordon and Wynton Marsalis. His first extended tenure was with Art Blakey’s Jazz Messengers: between1983 and 1986, Lonnie performed on twelve of Blakey’s albums, including the Grammy Award-winning, New York Scene.