The Return of the Brecker Brothers is strapped with a festive attitude programmed with hot and tasty beats packed in this delicious recording under the helm of Dave Grusin and Larry Rosen at GRP Records. Out of the box, the legendary saxophonist Michael Brecker and his talented brother Randy on trumpet wrapped their voices together to meet the demands of vigorous interplay while engaged to the elements of jazz meets rock to become a full-blown fusion excursion. Therefore, the BB’s remained bonded as one to their musical prowess became a dynamite duo on the music scene. Meanwhile, the talented duo armed themselves through various mood changes in the music industry to raise the bar as a-lists players on virtually thousands of recordings filled with fiery jazz coupled with their own signature of funk induced horn play. ~ The Urban Flux 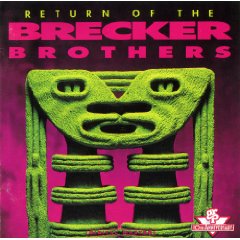 The Brecker Brothers, Return of

By the 1990s, smooth jazz had become such a commercial powerhouse that some established jazz artists were tripping over themselves to get in on the action. It had its own format on the radio, and records were selling briskly. Spyro Gyra, Grover Washington, Jr., George Howard, Gerald Albright, Jeff Lorber, and countless others were knocking out near platinum discs almost without trying. As a band, the Brecker Brothers were part of the initial contemporary jazz flowering in the late ’70s and early ’80s, with their seamless, driving mélange of jazz, funk, pop, soul, and fusion.

Saxophonist Michael and trumpeter Randy had issued a slew of records between 1975 and 1982 as the Brecker Brothers, but studio and touring commitments with other units and individuals kept them from recording as a band again for 12 years. Return of the Brecker Brothers was released in 1992 on Dave Grusin’s GRP imprint. Michael on saxophones and the Akai EWI (Electronic Wind Instrument) and Randy on trumpet and flügelhorn were supported by a rhythm section that included drummer Dennis Chambers, George Whitty on keyboards, and bassist James Genus. The set’s guests include guitarists Dean Brown and Michael Stern, percussionist Don Alias, saxophonist David Sanborn, and bassist Will Lee. This star-studded affair delivers an excellent jazz-funk record that has far more teeth than other smooth jazz efforts of the period. —Thom Jurek