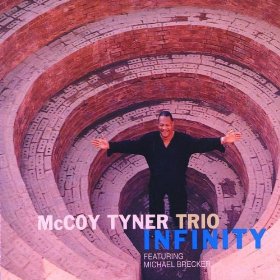 This is one of the best matchups of two of the most seminal figures in jazz today. There is no saxophonist alive more worthy of playing alongside the legendary pianist from the John Coltrane Quartet of the 1960s than Michael Brecker. His style is very much influenced by Coltrane’s ideas and harmonic innovations but he still manages to have a completely original voice. His playing on this date is up to his usual standard of excellence and truly seems to inspire and push the trio forward. One of the reasons that Tyner and Brecker play extremely well together is that both heavily employ the use of pentatonics. Their styles mesh amazingly well.

The music itself is mostly written by Tyner with a few exceptions including their take on Coltrane’s classic Impressions. Brecker truly extends himself on this modal standard but the highlight of the album is the first track, Flying High. Both Brecker and Tyner are in top form and play beautifully with extreme intensity. END_OF_DOCUMENT_TOKEN_TO_BE_REPLACED

Jazz lovers, if by chance you haven’t collected any recordings from the legendary Blue Note Records catalog. Then, without hesitation, I’ll highly recommend this amazing double disc collection by Jazzanova titled Blue Note Trip. In retrospect, this album captures the vibe and creative spirit of jazz during this incredible era is a perfect beginning to introduced yourself to this infallible music from Blue Note. ~ Rob Young | The Urban Music 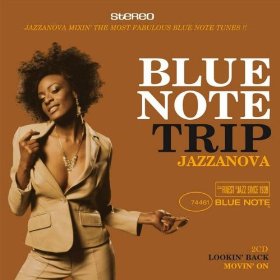 Berlin’s Jazzanova collective formed in 1995 after DJing with one another at a club called Delicious Doughnuts. Alexander Barck, Class Brieler, Roskow Kretschmann, Stefan Leisering, Axel Reinemer, and Jurgen von Knoblauch shared a common goal of blending their collected inspirations together to create a new, sophisticated sound with debts owed to nearly every form of dance-oriented music from the past several decades. Like a lot of upstart producers and underexposed jazz-funk ghosts of the past, Jazzanova got their first major break from BBC disc jockey Giles Peterson who played the group’s first production, “Fedime’s Flight” on his program in 1997. This helped set off a series of remix projects and the Jazzanova name became known for inspired DJ sets as well. END_OF_DOCUMENT_TOKEN_TO_BE_REPLACED