The godfather of today’s urban contemporary jazz scene, Grover Washington Jr., was one of the most popular and influential saxophonists of the ’70s and ’80s. And while he may have paved the way for such easy-listening artists as Kenny G, Najee, George Howard and Gerald Albright, none of those popular saxophonists play with the chops and sheer intensity that Grover
demonstrated on the bandstand from night to night throughout his career, which spanned three decades. And as the newly discovered Grover Live demonstrates, the man was clearly on top of his game well in to the ’90s. Recorded on June 7, 1997 at the Paramount Center for the Arts in Peekskill, New York, Grover Live, produced by Jason Miles (Miles Davis, Luther Vandross, Sting), captures the consummate pro in concert and at the peak of his powers, blowing with unbridled conviction and a sense of risk-taking on a collection of his tunes spanning three decades.

From familiar hits like “Winelight” and “Mr. Magic” to a medley of early numbers like “Inner City Blues,” “Black Frost” and “Just the Two of Us” to more recent offerings like “Mystical Force,” the hip-hop flavored “Uptown” and a contemporary spin on the old school groover, “Soulful Strut,” Grover and his crew – Adam Holzman and Donald Robinson on keyboards and synthesizers, Gerald Veasley on electric bass, Richard Lee on guitar, Pablo Batista on percussion and Steven Wolf on drums – stretch out in dynamic fashion on this exhilarating live CD.

Read the complete article at “The Urban Music Scene.com” …

I really do reserve that title for only one album every year. Now maybe my views will change by December 31, but I doubt it. First things first: even at his most accessible, Dave Douglas is not very accessible on first or second listen. But the more I listened to this album, the more I realized that these compositions are brilliant; these musicians are playing at the top of their game; and that they are interacting telepathically with one another. By the fifth listen or so, my ears were finally catching up to the wonderful music that these guys were hearing as they made the album. It was then that I realized why this album really is a heartfelt tribute to Mary Lou Williams. Sure, before that I knew that Douglas had thrown in some superficial tributes: for example, a few tunes were written by Mary Lou, and several tracks (most notably, Soul on Soul) incorporate stride piano lines and bebop licks and other styles that Williams played during her long career.

END_OF_DOCUMENT_TOKEN_TO_BE_REPLACED 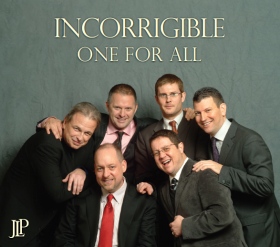 One For All - Incorrigible

Their band name suggests the Three Musketeers of 17th century Paris — inseparable friends who lived by the motto “one for all, all for one” — though it’s probably more accurate to think of these six kindred spirits as the Rat Pack of jazz. Given their longevity, they might also be considered the Rolling Stones of jazz. After more than 13 years together as a working sextet, the members of the cooperative group One For All have forged an uncanny chemistry and camaraderie both on and off the bandstand. That indelible tightness and like-minded pursuit of swing is readily apparent on Incorrigible, the group’s 15th release overall and debut for Jazz Legacy Productions.