HCM congratulates our artist Patricia Romania on her Troféu Louvemos o Senhor 2010 nomination for Best Female Singer for her incredible performance of the song “Anjo Guardião” on the Banda Canal da Grace CD.

If after experiencing Patricia’s performance you agree she is deserving of your vote … please go to the Troféu Louvemos o Senhor 2010 website and vote. 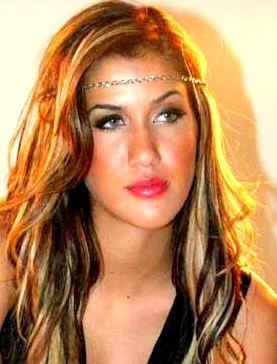 21 year old Brazilian singer Patricia began singing as a child – singing at parties for friends and family. At 7 years old, she sang in the Teatro Municipal de Araraquara in her native Brazil, interpreting the music “Era uma vez” composed by Peninha.

At 13 years old, she started performing at concerts throughout the state of Sao Paulo, Brazil. And, after 2 years she started to study classical music and lyric vocal, and participated in opera recitals in the Concert Hall of the Tulia USP. Among her presentations were tributes to Elis Regina, MPB, and American Blues and Jazz … performing with her Sao Paulo band.

She was first noticed in 2006 in a series of reports “Young Talents” on TV Globo. And, in the past few years, with a nod to the great traditions of Brazilian music and culture, Patricia has performed at local festivals throughout Brazil, and rodeos in Jaguariuna, Borborema and Barretos. In particular, she consistently “brought the house down” with her interpretation of the song “Ave Maria.”

Patricia recently released her first independent CD on her website. The CD was recorded in Salvador with the musicians of banda Babado Novo, and it was that music (including the song “Eu Te Juro”, which played on several radio stations in the state of São Paulo … rising to be a Top 20 song) that brought her to the attention of Hebert-Carrington Media. In addition to the incredible performance of “Anjo Guardião” with Banda Canal da Graça, Patricia can be seen in concerts throughout Brazil, and heard on the recent Raca Negra’s DVD singing the duet: “Devolva Me” with Luiz Carlos.

Hebert-Carrington Media anticipates Patricia’s international debut will be released in Japan / Asia Pacific and Europe in 4Q 2010, and in North America and Latin America in 1Q 2011.

HCM is focused on new business models for the communications and media industry. We partner with companies on both traditional media and digital media initiatives, including our strategic partners, artists, brands, products and catalogs. We market and sell products via online interactive environments that will set us apart from other media companies and digital marketing and eCommerce platforms.

As a media company, implicitly a major part of our team’s business plan is a “Digital Media Group”. We own, create and license digital content from artists and media companies in a cost effective manner to ensure efficient and reliable creation and delivery of audio, video, content and data products and services to our customers on a global basis.

In addition to working with Patricia, HCM has several major initiatives in 2010, including:

Check out Patricia Romania at MySpace.com.