Greetings’ once again fellow jazz enthusiasts, May continues in week two with more distinctive and insinuating sounds, melodies, rhythms & dexterous flavors of jazz to quench your ongoing thirst for quality music. I’m humbled to have the opportunity to compile for your viewing pleasure an extraordinarily complex yet diverse mix of New Music [Jazz] Releases this and every week. In fact, the featured album of week was very difficult to choose because of the variety of new stuff coming out. Actually, there’s two choices beginning with vocal sensation José James and his debut on Verve Records titled “For All We Know” features pianist Jef Neve on this inescapable duo offering. Being that there are virtually tons of great music waiting to be heard it was fitting to include guitarist/vocalist Jonathan Butler’s, “So Strong” arrives just in time. Trumpeter Arturo Sandoval puts his touch to sweet melodies of “Time for Love,” guitarist Al Di Meola scores One Night in Montreal,” bassist Joseph Patrick Moore takes us on a music safari with “To Africa With Love.” To my surprise, I stumbled into also another nu-voice this week the Stephen Anderson Trio and his latest “Nation Degeneration” and then we have a remarkable new saxophonist on the horizon named Sarah Manning to shake things up with her fabulous new record “Dandelion Clock,” and to round things out is jazz guitarist Andreas Öberg’s “Six String Evolution” is on hand and lots more. 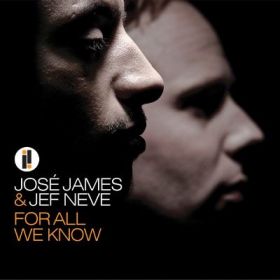 José James (and Jef Neve) - For All We Know

“A labor of love” is how José James describes his May 11, 2010, release For All We Know, his first American release and his first for the Impulse! label. A collaboration between James and noted Belgian pianist Jef Neve, the album finds the charismatic young singer applying his warm, rich baritone to a sterling assortment of jazz standards, including “Tenderly,” “Body and Soul” and George and Ira Gershwin’s “Embraceable You.” All but one of For All We Know’s songs was recorded in one informal six-hour session at Galaxy Studios in Mol, Belgium, with no producer, no overdubs and no retakes.

While For All We Know presents José James as a masterful vocal interpreter, the artist’s resume encompasses an impressive variety of musical experiences. After moving to New York to attend the New School’s prestigious jazz program, he studied with instrumental legends Junior Mance and Chico Hamilton. James’ growing notoriety led to collaborations with a wide assortment of jazz, club and hip-hop acts, including Basement Jaxx, Nicola Conte, Jazzanova, Flying Lotus and Christian McBride.

Having already won the hearts of international audiences, José James is enthusiastic about the opportunity to make a splash in his home country. “It’s so exciting, and it’s a huge honor to be on Impulse; it’s Trane’s house. I’m very proud of this record, and I love being able to give back to the music that nurtured me.”

Below we have list of this weeks latest jazz releases, also while you’re here check out Amazon.com for and extended lists of imports, vinyl and re-issues.