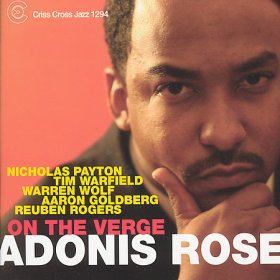 Adonis Rose - On The Verge

On the Verge comes eight years after Unity and a full decade since Adonis Rose’s debut Song for Donise. Rose recorded this, his third album, in 2004. In the album’s liner notes, he said that, at the time of the recording, he felt he was “on the verge of doing something new and creative.” The product doesn’t sound like a musician on the precipice of any great musical breakthrough; instead, it’s a string of solid straight-ahead tracks and pleasant, contemporary mid-tempo tunes. Rose’s chops, however, have seasoned and his writing (he penned four of the eight cuts) has tightened. He brought his crew — trumpeter Nicholas Payton saxophonist Tim Warfield and bassist Reuben Rogers — with him, too. Only Anthony Wonsey is missing from the former quintet that toured and recorded extensively together. Payton, Warfield and Rogers use this familiarity to turn in stalwart performances where the entertainment is found in the interplay between old friends, since there aren’t many virtuoso solos or theatrics on this date. END_OF_DOCUMENT_TOKEN_TO_BE_REPLACED

Greetings and blessings fellow jazz enthusiasts, I hope that you guys have a safe and fabulous weekend! Today, I have a review of bassist Alper Yilmaz’s latest recording “Over the Clouds.” Enjoy! 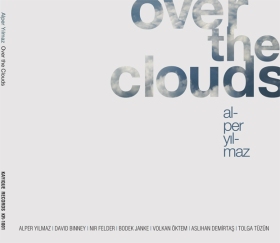 Alper Yilmaz - Over the Clouds

Turkish born bassist/composer Alper Yilmaz undoubtedly cast his signature onto what’s herald as a brilliant follow up to his 2007 album “Clashes” with his sophomore release “Over the Clouds” on Kayique Records.

With this project, Yilmaz conjures up what is to be an unwavering compilation of improvised /modern jazz blending deep fragments of jazz/fusion. To make these original gems manifest, he surrounds himself with top-shelve players including renowned alto saxophonist and mentor David Binney to carve his name into this collection of annular shapes and cerebral textures exhibited within the passages of “Over the Clouds.” END_OF_DOCUMENT_TOKEN_TO_BE_REPLACED