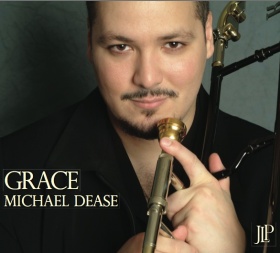 In just seven years on the New York scene, trombonist Michael Dease has appeared on over fifty albums as a sideman, performed in every major jazz venue, and worked alongside many of the giants of this music. And now his latest CD, Grace – Dease’s fourth as a leader and his first for Jazz Legacy Productions – affords him a much deserved opportunity to display his musical range and versatility as an instrumentalist, thanks to the vision of bassist, producer, and the label’s founder, John Lee.

“I met John at the Village Vanguard in September 2007,” Dease recalls, “when I was playing with Slide Hampton’s World of Trombones, and since then we’ve been working closely together. He asked me to join his band, Dizzy Gillespie All-Stars. Then I was producing a recording for saxophonist Sharel Cassity – I also participated as a sideman on that record – and John was interested in having her as a young artist for his new label Jazz Legacy Productions. When we were gearing up for Sharel’s CD release in 2009 he asked me if I would be another one of the JLP’s young artists. Of course I was very excited to have John produce my album, with his vast experience and insight.” END_OF_DOCUMENT_TOKEN_TO_BE_REPLACED

Join us in the Plaza Level of the Art of the Americas Building, where BUA’s Urban Art Studio will feature original paintings and drawings as the artist himself hosts conversations with leading artists, musicians, dancers, and more: END_OF_DOCUMENT_TOKEN_TO_BE_REPLACED