Greeting’s jazz enthusiasts, I’m back with another tasty mix of jazz that’s undoubtedly shaken and well stirred from the shelves of the “Flux Music Essentials.” As can you see, the titles below may or may not fit in the category of hot selling artist/recordings. Nevertheless, they’re personal favorites that I’ve met and grown to love. 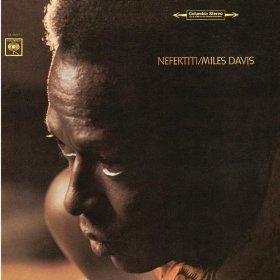 The fourth studio album by the second great Miles Davis quintet, and the second comprising material recorded in the pivotal year of 1967, NEFERTITI marked yet another metamorphosis in the career of a great musician noted for welcoming change. While Davis (1926-1991) did not make wholesale, far- reaching alterations on NEFERTITI, as he had on KIND OF BLUE and E.S.P and would on BITCHES BREW, one could say that the pace-setting trumpeter-bandleader modified his approach to the freebop that had for two-and-and-half years been his group’s bread and butter, at least for recording purposes.

On the title selection, and to a lesser extent on “Fall” (another indelibly aching piece) and “Pinocchio,” all high water marks in the catalog of tenor saxophonist Wayne Shorter, the group’s principal composer, Davis had the front line and rhythm section reverse their traditional roles. While the horns repeated the theme again and again, pianist Herbie Hancock, bassist Ron Carter, and drummer Tony Williams shifted the beat’s emphasis, stretched the time, and offered a full dynamic/emotional range. The effect was like a series of time lapse photographs of a particularly beautiful scene, with light and color and shadows subtly, but continually changing, thus shifting the focus of one’s eye – or, in this case, ear. This made for some of Davis’ most mesmerizing music since KIND OF BLUE and SKETCHES OF SPAIN. 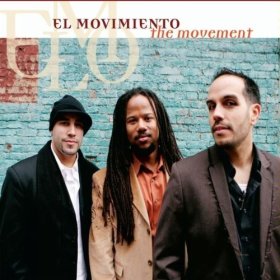 “Elmo”, as the band has come to be known by its fans, has, even since its very beginnings, been committed to both building on the heritage passed on by traditional Latin-jazz giants (such as Tito Puente and Eddie Palmieri) and also to incorporating the contemporary influences of modern jazz, rock and other popular American styles. The result of these two pursuits is a unique musical expression capable of satisfying both die-hard fans of Latin-jazz as well as enchanting a younger generation of listeners who are more familiar with the newer sounds of contemporary jazz, soul music and Latin pop. —MySpace.com

Bobby McFerrin is a musical genius, and this album continues to demonstrate that fact. His compositions and improvisations go beyond what anyone previously thought the human voice could do. Relative to the previous albums I’ve heard by him (Circlesongs, Beyond Words), this one has fuller orchestrations and a much larger chorus. I’m reminded of Bach, Mozart, and Manhattan Transfer, mixed with joyous African rhythms and harmonies (think Lion King) and scat singing. McFerrin’s own solo vocals feature his clear, flutelike falsetto.

Listen to this album, but also make sure to watch clips of McFerrin’s vocal improvisations on YouTube. Better yet, try to see him in concert. We saw his live performance last night in San Francisco, and it knocked our socks off. His musical improvisation reminds me a bit of Robin Williams playing the genie in Aladdin – the performance is eclectic, eccentric, surprising, joyous, virtuous and beautiful. Kudos to McFerrin for finding his amazing voice, creating something entirely new, and moving us to pure ecstasy with his music. —David Reiley/Amazon.com

Pianist, child prodigy, computer whiz, composer, arranger and virtuoso Aaron Parks makes his Blue Note Records debut with “Invisible Cinema.” After my first encounter, I took a deep breath, shy in wonderment of how I would attempt to unfold into words what this young pianist Aaron Parks has embarked upon. His indescribable harmonic tones, melodies and abstract arrangements lay in the path of a seemingly dark world of Cinematic explorations, are is it an “invisible exploration” from the prolific vision and genius of Aaron Parks.

Let’s meet his supporting cast that shapes this remarkable palette of music features guitarist – Mike Moreno, bassist – Matt Penman and drummer – Eric Harland. With this quartet, you may or not have heard of them. Nonetheless, they are impeccable group of artists drawn from within this body of a-list players that makes his music work effectively. —Rob Young/Review 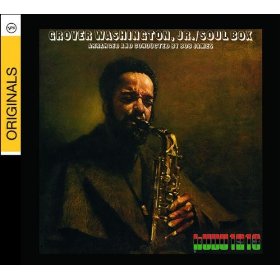 Oh, this is SO fantastic and beautiful. This is a re-issue on one cd (re-mastered) that was available only very briefly on 2 Motown cd’s many years ago (vol.1, vol.2). If you are to own only 1 Grover Washington Jr. re-
cording, this is the one. Originally released as 2 albums in a box set on the KUDU label (CTI auxiliary) back in the early 70’s, this is utter perfection and brilliance from start to finish. Several of the tracks are over 10 minutes in length. Bob James arranged/conducted this session with a who’s-who of the CTI/KUDU 70’s all star studio cats with added strings and voices, and brilliantly recorded. “Trouble Man”, “Masterpiece”, “Don’t Explain”, “Easy Living/Ain’t Nobody’s business” all just kick a**. This was a stellar effort for Bob James at his best. It all meshes so well. I’ve listened to it countless times since the first time I heard it and was blown away. It was my first Grover Washington album, and I still think it’s his best. Sadly, Grover is no longer with us and left us MUCH too soon, but his fabulous music (such as this) will live on forever. A masterpiece indeed. Thanks Grover. 20 million stars. —James K. Steward/Amazon.com