Greetings jazz aficionados, it’s great to be among the living once again and afforded the opportunity to share with you music that I occasionally delve into especially on the weekends. As you know, the voice of jazz is infinite by design from beginning to the ending note it transforms those who allow themselves to surpass their ordinary soundscape and seek the prolific journey that awaits us. With that said, during my personal quest I often see and even hear these artists I’d love to partake in but for obvious reasons I’m not always able to cease the moment.

On today, I’m delighted to say I’ve been ushered into the world of music by a gentleman (you might already know) that I’ve grown to appreciate the voice and compositional palette of saxophonist Greg Osby. As I hear it, the St. Louis, MO native is undoubtedly a true innovator, progressive thinker, musician, songwriter and arranger with two exceptional albums featured from his vast body of work.

I became interested in this CD primarily because I was looking for dates on which Stefon Harris appeared. I’m a huge fan of Harris’s extremely intelligent composition and playing, so anybody with whom he shared company had to be remarkable. Well, here he is, working with Greg Osby and fellow sideman (and ingenious solo artist in his own right) Jason Moran. I was delighted to hear how well these artists complement each other, when any one of them could have easily overpowered the other.

This is still Greg Osby’s date, of course, which is why he composed almost all of the songs, except for one by Björk and Mingus’s classic “Self Portrait in Three Colors.” The opening “Entruption” is a wonderfully frustrating performance, using space to give a stop-start feel, without sacrificing an implied groove. It’s my favorite on the disk, rivaled only by the Mingus cover and “Fragmatic Decoding,” the kind of song you’d imagine a String Theory mathematician would compose. As a non-musician, I’m simply amazed that anybody could play the dense thing.

If you are into progressive/avant-garde, yet accessible contemporary jazz, this is your disk. You will not be disappointed. —Darryl Dickson Carr/Amazon.com END_OF_DOCUMENT_TOKEN_TO_BE_REPLACED 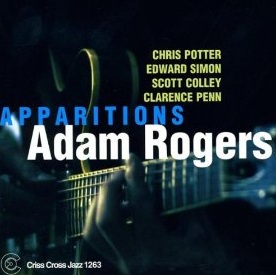 This is Adam Rogers’ third CD for Gerry Teeken’s Criss Cross label. The rhythm section has remained the same for all 3 outings: Edward Simon (piano), Scott Colley (double bass) and Clarence Penn (drums). Also featured on this one is Chris Potter on tenor sax. Although I agree with the previous reviewer in his statement about Criss Cross releasing mostly straight forward, mainstream jazz, I think Adam Rogers has done quite a bit in expanding the harmonic and technical possibilities of his instrument. Also his compositions are very accomplished and modern, somewhat in the same vein as his contemporaries like Kurt Rosenwinkel, Ben Monder and Mark Turner etc.

Guitar players seldom manage to maintain the listeners’ interest if they release a record comprising solely of their own compositions. That is because their compositions are often too “guitaristic”. Adam Rogers certainly hasn’t got this problem. For this date, he has again provided 8 originals of great interest.

The first thing that really strikes the listener at first is Adam’s amazing picking technique. A very few guitarists are able to maintain such a clarity when fast lines. One is reminded of Pat Martino in his prime.

Without analyzing the compositions in detail, I could finish by saying that this CD isn’t recommended only to guitarists, but also to everyone who’s interesting in some of the best playing AND composing in jazz today. Adam and his band really seem to have something going on, certainly some of the hippest sounds around.

“Brian is the consummate musician – he can do it all. But it’s his incredibly memorable and infectious melodies that truly set him apart. He just has a knack for writing these songs that take you on a journey and truly tell a story – and then he’s able to deliver them musically with his trademark style. I am a huge fan!” – Dave Koz

“What I love about Brian’s playing is his understanding that melody and groove are important – the meat and potatoes of music. Brian has found a unique way of being musically creative while making his music accessible. My hats off to you B.”– George Duke

Celebrated keyboardist, composer and studio musician, Brian Simpson has been the ‘go-to’ man for everyone from Janet Jackson and Teena Marie to George Duke, Stanley Clarke and Dave Koz, for whom he has had the distinction of being musical director for the past 15 years. The chart-topping musical chameleon who wrote the #1 R&B hit “The First Time” for Surface in the 1990s confesses, “Ultimately, my listeners inspire me to make my music.” Simpson’s love for what he does is evident in every note on South Beach, his inaugural album for Shanachie Entertainment, due out August 31, 2010. Simpson surrounds himself with an A-list lineup that includes jazz icons George Duke, Peter White and Euge Groove. END_OF_DOCUMENT_TOKEN_TO_BE_REPLACED

CONTEXTUALIZIN’ is the second release from the Ian Carey Quintet, a tight group of five Bay Area improvisers who have been developing their chemistry for the past six years. Along with the leader’s trumpet, flugelhorn, and compositions, the group features Evan Francis (of Spaceheater and the Jazz Mafia) on saxophone and flute, Adam Shulman (of the Marcus Shelby Orchestra) on piano, Jon Arkin (of Albino) on drums, and San Francisco jazz legend Fred Randolph on bass.

“Ian Carey is a gifted young trumpeter and composer who asks deep musical questions and comes up with compelling answers.” – Bill Kirchner, composer/educator, and editor of The Oxford Companion to Jazz and The Miles Davis Reader. —CDBaby.com/Album Notes

When the imposing talents of one of today’s most versatile Latin jazz artists meld with the organic richness of some of the world’s greatest cultural melting pots, the results are guaranteed to be as fresh and virtuosic as they are revealing and magical. That’s what transpires on Yaoundé, the new release by Samuel Torres. The session confirms that this multi-talented Colombian musician’s rapidly evolving prowess as a composer has come to rival his international acclaim as one of the best percussionists of his generation.

Torres was born September 4, 1976 in Colombia’s bustling capital city of Bogotá and was nurtured in this culturally sophisticated metropolis where jazz and classical music share the stage with salsa and an infinite variety of Colombian folkloric idioms. His earliest exposure to music came at home, thanks to an extended family of musicians and ready access to a wealth of Colombian music genres, from the infectious rhythms of the cumbia and vallenato to styles which reflect a range of African, indigenous and European influences, including the porro, bambuco and pasillo.

A major inspiration was Edy Martinez, an uncle who had risen to fame in the New York City salsa scene in the early 1970s as a pianist and arranger in conga player Ray Barretto’s popular conjunto. Torres further cites Barretto as a primary influence and credits exposure to two seminal Barretto albums that featured his uncle, the early Latin jazz classic The Other Road and the salsa powerhouse Indestructible, as helping to spur his interest in becoming a musician.

As I listen to this project, it occurred to me that I’ve encountered a variety of musical interludes during my quest to discover new music over the years. On this occasion, I find myself amid the radiant tempo, shapes and flavorings of Fields of Moons for which I’m elated to meet for the first time the somber voice of its owner trombonist/tubas’ Chris Washburne and his remarkable Latin jazz inspired ensemble SYOTOS and their extraordinary new recording on Jazzheads Records titled “Fields of Moons.”

Washburne and his comrades open this pulsating set of ten compositions with transcending melodies, harmonies and patterns found in the center of the illusive beginning of “Fields of Moons.” The unique yet warm and alluring equilibrium grows with an eclipse of soulful vibes underneath to gather strength while blanketed in a tapestry of a romantic samba is supported by the poignant interplay of SYOTOS as they exchange note for note expressively to erect their tasteful voicing’s as one collectively! END_OF_DOCUMENT_TOKEN_TO_BE_REPLACED

Striving for the soulful essence, that’s what Paul Carr aims for and ultimately achieves with this delightful new disc. An apt subtitle or guiding principle, might just as well have been back to the roots. For this date, Paul journeyed back to the source, to some of his original inspiration on the tenor saxophone, back to Houston, TX where his quest began. This date is indelibly influenced by that background: by the good times/high times joints in his neighborhood which exuded jazz and blues from their very woodwork, by the deeply moving sounds emanating from nearby churches with parishioners praying, rejoicing, and testifying to their glories and sorrows, by the clickety-clack presence of the trains riding the nearby rails — what author Albert Murray referred to as railroad onomatopoeia–the incessant thrum of those rails. Those inspirations coupled with vivid memories of sitting at the feed of such Houston mentors as saxophonists Arnett Cobb, Don Wilkerson, and Conrad Johnson, are the raw materials that Carr successfully melded to make this record. END_OF_DOCUMENT_TOKEN_TO_BE_REPLACED 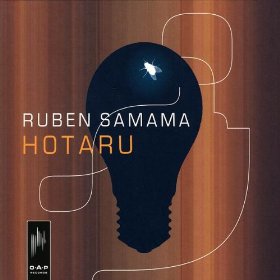 What a surprisingly versatile and strong band bass player Ruben Samama brought together here for his debut CD! There is really a lot to be discovered and enjoyed in this dynamic album: the inescapable structures of the arrangements, the exciting and frenetic movement of ‘Ji’, the touching way a classic like Gordon Jenkins’ ‘Goodbye’ is handled, the inspired and to-the-point soloing, this is a band with a sound of its own.

What young cats? This is jazz from and for grown ups. —O.A.P. Records

Distinguished Bandleader To Be Included In Two Upcoming Documentaries

Mack Avenue recording artist Gerald Wilson is a legend amongst those in the music community as a premier composer, trumpeter, arranger, bandleader and educator. His work, during his rich and varied seven-decade career, has supported some of the greatest names in jazz including Ella Fitzgerald, Ray Charles, Bobby Darin, Duke Ellington, Count Basie, Benny Carter, Nancy Wilson, Sarah Vaughn and Ray Charles, as well as a scorer for motion pictures and television shows such as Otto Preminger’s “Anatomy Of A Murder” and ABC’s variety program “The Red Foxx Show.” Wilson also scored a top 40 pop hit with El Chicano’s version of his song “Viva Torado” in 1971. Recently, Wilson was in the studio recording new material for his sixth release for the Mack Avenue Records label (which is yet to be titled), a follow up to 2009’s Detroit.

The perennially inexhaustible bandleader will be included in two upcoming documentaries; the first about Cab Calloway produced by ARTE France and expected to air in America on PBS, and the other about Los Angeles’ storied Million Dollar Theater. END_OF_DOCUMENT_TOKEN_TO_BE_REPLACED

Greetings’ jazz aficionados, I’m back with an intricate canvas of what’s -cool- and maybe not so -cool- from a optimistic perspective we don’t usually find in the diet of the chromatic pop music culture. The origin of new music featured each week encompasses various branches of jazz, which exudes a wealth of complex and distinctive styles, insinuating textures, immaculate melodies, and relentless rhythms exalted by the definitive voices of creative artists serves up sounds to quench our immutable thirst for quality music.

Tyler Hornby - A Road to Remember

For as long as he can remember, Tyler Hornby has been on a musical journey. He encountered jazz early on while growing up in Alberta, living in a house that doubled as a rehearsal space for his guitar playing father, his bass playing brother and big band singer grandmother.

He started drumming at age 10, honed his artistry in high school big bands and experimental jazz combos, and has blossomed into one of the country’s most innovative and sought-after young drummers.