“Ortiz and his quartet explore a broad landscape of musical styles, performance techniques, and compositional strategies on Alameda, an inspired collection of diverse pieces.” – Chip Boaz, The Latin Jazz Corner 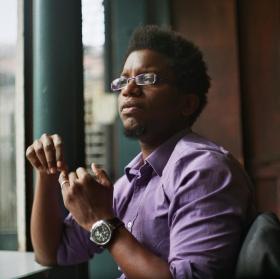 Jazz pianist Aruán Ortiz, “the latest Cuban wunderkind to arrive in the United States” (John Murph, http://www.BETJazz.com ), hit the ground running when he came on the American jazz scene in 2003. A classically trained violist and pianist, this Santiago de Cuba native’s sound is as marked by the influence of the contemporary classical composers such as Schoenberg, Ravel, and Copland, as it is by traditional Afro-Cuban sounds and jazz greats such as Bud Powell, Art Tatum, and Thelonious Monk. A major testament to his massive talent, since setting foot in the States Ortiz was quickly called upon to perform and record with artists such as Terri Lyne Carrington, Greg Osby, Cindy Blackman, Esperanza Spalding, Gary Thomas, Wayne Krantz, Rashied Ali, Stefon Harris, Horacio “el negro” Hernández, Giovanni Hidalgo, Lionel Loueke, Jane Bunnett, Jerry Bergonzi and others. Ortiz is currently a member of jazz legend Wallace Roney’s Quintet, Sound of The Future, and is prominently featured on Roney’s new live recording, If Only For One Night (High Note, 2009).

While Aruán Ortiz refers to himself simply as a jazz musician, before a Cuban jazz musician, he adeptly incorporates Middle Eastern, Asian, African, and Cuban rhythmic elements into his compositions. This is evident in the original compositions on his recordings as a bandleader, Impresión Tropical (Universal 1996); Vol. 1 (Universal, 2004); and even more prevalently and refined on his newest recording, Alameda, where Aruán pays homage the jazz trio and quartet formats, recalling the stylings of jazz greats such as Andrew Hill and Phineas Newborn, while incorporating the rhythms of his Cuban antecedents.

Alameda opens with the title track that was inspired by the sounds and rhythms of Santiago de Cuba. Ortiz explains further, “Very popular in 19th Century, the Alameda was an outdoor social space where young people in society would spend afternoons with friends and family. This composition was inspired by this essential part of the city’s cultural history.” Its serpentine melodic and rhythmic counterpoint offers the listener a new journey, and new emotions, with each listen. With “Gregorio’s Mood”, dedicated to Cuban conga master Gregorio Vento who Ortiz played with extensively during his years in Boston, Ortiz gives saxophonists Abraham Burton and Antoine Roney ample room to stretch and express, which they take full advantage of. The two also pair up and shine brightly on “Green City” inspired by the city of Boston in the summertime. “This is a tune where two of the most creative and dynamic sax players on the scene today explore their own reality in a great musical conversation,” explained Ortiz. His own solo on this tune, and in fact the entire recording, is relentlessly swinging, searching and brilliant. Alameda continues with the pianist’s engaging arrangement of one of his favorite melodies, Chopin’s “Etude No. 6 Op. 10”, and a nod to Bird with “Bird’s Motif”, which the band attacks fervently. Take note of the uber-creative drum breaks courtesy of Eric McPherson (as well as his wall of sound intro to “Green City”). Bassist Peter Slavov’s wonderful sound opens up “Landscape of A Dry Watermelon”, featuring a will-definitely-make-you-move drum and bass groove that Ortiz soars over, armed with brilliant melodic abstractions on the Fender Rhodes. “This tune allowed me to use my imagination to conceive a piece of music inspired by this particular and surrealistic concept,” said Ortiz. Other highlights on Alameda include the lovely “Liz’s Flower”, “the story of two souls matching in one reality and growing together as one. Inspired by my daily life with my wife, Laura”, explained Ortiz, and “Slow Motion”, which asks and answers the question, what if we could see life in slow motion? Ortiz said of this tune, “the perception of that possibility inspired me to write this composition, exploring different ways to answer that question in a collective musical interaction.”

More on Aruán Ortiz: After winning Best Cuban Composition at the Symposium of Cuban Music in Jamaica in 1995, Aruán was discovered by the Spanish record label Magic Music/Universal Latino, which brought him to Spain. There he participated in the compilation project La Isla de la Música (1996), which was acclaimed by the international press and recognized as one of the first albums to bring Cuban music to the European and American mainstream. While in Europe he was the recipient of various awards including Best Jazz Interpretation, Festival de Jazz in Vic, Spain (2000), and Semifinalist, Jas Hennessy Piano Solo Competition, Montreux, Switzerland (2001). Aruán’s jazz career subsequently took off as a sideman in Barcelona, Paris and later in the U.S.

Aruán’s ability to subtly incorporate world music elements into jazz makes his sense of creativity unique and recognizable in different styles. This musical vision led him to be featured on dozens of albums such as the Flamenco influenced recording Evocación by the Spanish trumpeter Raynald Colom (2009), Esperanza Spalding’s Junjo (Ayva Música, 2005), Arturo Stable’s Notes on Canvas (Origen Records, 2005) and Calls (Origen Records, 2009), and Russell Kirk’s Path to Journal Square (Inner Circle Music, 2009). In 2006 Aruán was invited to play Nat King Cole’s music in Monroe Kent III’s solo performance, “Unforgettable, The Nat King Cole Story”, at the Stoneham Theatre. Most recently, Aruán is featured on the innovative recording If Only For One Night (High Note).

For the last two years, Aruán has been a member of this multi award winning jazz legend’s quintet, Sound of the Future, touring and recording extensively around the world. Rocky Mountain Jazz said of a recent performance, “Wallace Roney is a Miles Davis disciple and last night’s show had Miles stamped all over it . . . Aruán Ortiz on keyboards was a particular highlight”.

Aruán Ortiz is a critically acclaimed and recognized artist, not only on the New York City scene, but around the globe as well. This will surely continue with the release of his definitive musical statement to date, Alameda.