Marc Perrenoud (piano) was born in 1981 in Geneva. He starts piano at the age of 6, in Zurich. He obtains his diploma (in the subject of performance) in 2006 at the Ecole de jazz de Lausanne bye Mr. Yannick DÃlez.

As soon as 2001, he plays in numerous jazz bands all across Switzerland, France and Germany and partakes in festivals held in Montreux jazz, Estival Jazz Lugano, Bern International Jazz, Onze +, Contrebande Jazz, Sunside (Paris), la DÃ©fense (Paris), Cairo Opera House, Buenos Aires ( Argentina ) Madajazzcar (Madagascar)
Concomitantly, he wins several contests such as the Â«Montreux jazz Chrysler AwardÂ» in 2003, the Friedlwald grant, Zurich, in 2005 as well as the award for best soloist at the International Bern Festival in 2006 (trio), patiÃ±o 2007.

In 2007, he wins the Patino grand in collaboration with the International City of Art, Paris. In 2008 he recorded his first trio album âœLogoâ by the German jazz label âœNeuklangâ. Marc Perrenoud is member of the famous band Piano Seven. 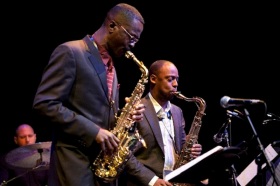 “The arts–and arts education–are a vital part of the fabric of New York City,” said George Soros, chairman of the Open Society Foundations. “This funding will help organizations that have been under severe strain because of the economic crisis.”

The $11 million investment is made through the Performing Arts Recovery Initiative, a special one-time grant program sponsored by the Open Society Foundations and managed by the Fund for the City of New York. The program is focused on supporting nonprofit music, dance, and theater groups that are recognized for the quality of their artistic work, their strong educational programs for young people, their employment of artists and their other contributions to the vibrancy of New York City’s cultural life. END_OF_DOCUMENT_TOKEN_TO_BE_REPLACED

“The Jazz Passengers make jazz that’s smart and witty and raucous. For all its unpredictable forms and modernist dissonances, the music comes across as boisterous fun. The Passengers’ basic sound is that of a densely dissonant hard-bop band, updating Charles Mingus’s Jazz Workshop groups, Art Blakey’s Jazz Messengers and some of Bobby Hutcherson’s and Eric Dolphy’s 1960’s Blue Note albums. Unlike their jazz antecedents, the Passengers deal as much in texture as in melody; their arrangements jump from Mingus-style full-band brawls to saxophone-trombone duets to rock-guitar riffs, with a postmodern jazz band’s pleasure in odd juxtapositions.”
– Jon Pareles, The New York Times (Feb 18, 1988)

Justin Time Records announces the North American release of Reunited, the new recording by The Jazz Passengers, and its first recording in 12 years. The recording, positively blasting with energy, features the venerable NYC-based ensemble in its original incarnation, with guitarist Marc Ribot (re) joining members Roy Nathanson, Curtis Fowlkes, Brad Jones, Bill Ware, Sam Bardfeld and E.J. Rodriguez for what is not only an undeniably strong record, but arguably the acclaimed group’s best work. END_OF_DOCUMENT_TOKEN_TO_BE_REPLACED

Bassist and composer Brandi Disterheft is fast becoming one of jazz’s brightest lights. Still in her twenties, she’s already made a huge impression on thousands of listeners, for both her imaginative live shows and her well-conceived recordings. Brandi’s premier album, Debut, won her the 2008 JUNO award (Canada’s Grammy), and her CV already catalogs successful concerts as far away as Japan and Haiti, and at jazz festivals from Vienna to Chicago, and a performance at Carnegie Hall.

It’s not only her fiery bass playing and charismatic performances that make people take notice. It’s also her innovative writing style, informed by various influences, from Mingus to Bjork. As Oscar Peterson said, “She is what we call serious.” END_OF_DOCUMENT_TOKEN_TO_BE_REPLACED