Greetings jazz aficionados, it’s great to be among the living once again and afforded the opportunity to share with you music that I occasionally delve into especially on the weekends. As you know, the voice of jazz is infinite by design from beginning to the ending note it transforms those who allow themselves to surpass their ordinary soundscape and seek the prolific journey that awaits us. With that said, during my personal quest I often see and even hear these artists I’d love to partake in but for obvious reasons I’m not always able to cease the moment.

On today, I’m delighted to say I’ve been ushered into the world of music by a gentleman (you might already know) that I’ve grown to appreciate the voice and compositional palette of saxophonist Greg Osby. As I hear it, the St. Louis, MO native is undoubtedly a true innovator, progressive thinker, musician, songwriter and arranger with two exceptional albums featured from his vast body of work.

I became interested in this CD primarily because I was looking for dates on which Stefon Harris appeared. I’m a huge fan of Harris’s extremely intelligent composition and playing, so anybody with whom he shared company had to be remarkable. Well, here he is, working with Greg Osby and fellow sideman (and ingenious solo artist in his own right) Jason Moran. I was delighted to hear how well these artists complement each other, when any one of them could have easily overpowered the other.

This is still Greg Osby’s date, of course, which is why he composed almost all of the songs, except for one by Björk and Mingus’s classic “Self Portrait in Three Colors.” The opening “Entruption” is a wonderfully frustrating performance, using space to give a stop-start feel, without sacrificing an implied groove. It’s my favorite on the disk, rivaled only by the Mingus cover and “Fragmatic Decoding,” the kind of song you’d imagine a String Theory mathematician would compose. As a non-musician, I’m simply amazed that anybody could play the dense thing.

If you are into progressive/avant-garde, yet accessible contemporary jazz, this is your disk. You will not be disappointed. —Darryl Dickson Carr/Amazon.com 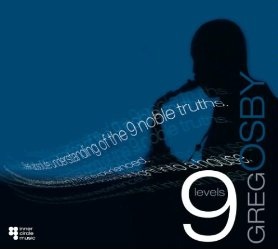 Saxophonist, composer, producer and educator Greg Osby has made an indelible mark on contemporary jazz as a leader of his own ensembles and as a guest artist with other acclaimed jazz groups for the past 20 years. Highly regarded for his insightful and innovative approach to composition and performance, Osby is a shining beacon among the current generation of jazz musicians. He has earned numerous awards and critical acclaim for his recorded works and passionate live performances.

Born and reared in St. Louis, Greg Osby began his professional music career in 1975, after three years of private studies on clarinet, flute and alto saxophone. Coming from a vibrant and musical city, Osby showed an early interest in the performing arts and spent his years in secondary school with a heavy involvement in Blues and Jazz groups. In 1978 Osby furthered his musical education at Howard University (Washington, D.C.) where he majored in Jazz Studies. He continued his studies at the Berklee College of Music (Boston, MA) from 1980 to 1983. —Biography

Learn more about this extraordinary artist by visiting http://www.gregosby.com/ … while you’re there checkout his amazing discography .