Greeting’s jazz enthusiasts, I’m honored to be back this week with the enthralling new project “Chamber Music Society” by vocalist, songwriter and bassist Esperanza Spalding as the featured “Album of the Week” and Review.

As always, there’s another intricate canvas of what’s -cool- and maybe not so -cool- from a optimistic perspective we don’t usually find in the diet of the chromatic pop music culture. The origin of new music featured each week encompasses various branches of jazz, which exudes a wealth of complex and distinctive styles, insinuating textures, immaculate melodies, and relentless rhythms exalted by the definitive voices of creative artists serves up sounds to quench our immutable thirst for quality music. 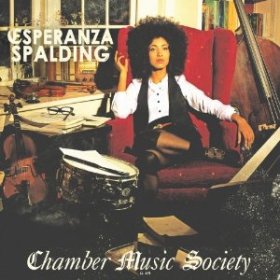 There are artists who seem to appear out of nowhere, their talented, exuberant and gifted beyond measure. In this case, we have the incomparable Esperanza Spalding– vocalist, songwriter and bassist extraordinaire is certainly one of those compelling artists. Esperanza arrives in the heat of summer with a delicious palette of creative and innovative music that could be viewed as her most satisfying recording to date “Chamber Music Society.”

At the moment, Esperanza is not limited to the backdrop of the jazz world. In fact, on her sophomore and self-titled project Spalding surprisingly caught the music world by storm with her inescapable vocals, style, and charm to lyrically exude her music effortlessly into a larger realm. END_OF_DOCUMENT_TOKEN_TO_BE_REPLACED

Without hesitation, some jazz enthusiasts will argue how the genius of pianist Thelonious Monk surpasses understanding for the average novice. That’s until his sixth solo album “Straight No Chaser,” arrived in 1967 to reshape the perception of how post-modern jazz is listen too. —Rob Young / The Urban Flux 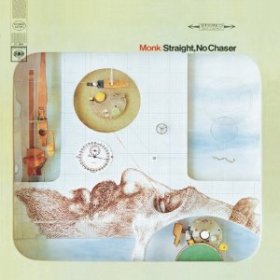 This cd release is a showcase for Monk’s last great group from the late 60’s. Monk’s piano is backed by the painfully underrated Charlie Rouse on tenor, Larry Gales on bass, and Ben Riley on drums. Monk’s soloing is inspired and creative throughout. He swings hard on the title track, as well as the little know gem that opens the album, Locomotion. Of the two solo pieces, This is My Story, This is My Song stands out as a sweet soulful display of Monk’s unique touch and harmonic sense.

Charlie Rouse’s warm round tenor remains with Coltrane, and Johnny Griffin as Monk’s most complimentary soloists. His robust tone on the title track and Locomotion is countered by his sensitive interpretations of I didn’t Know About You and Japanese Folk Song (Kojo No Tsuki). More beneficial to the listener than the standard “bonus tracks” are the restored bass and drum solos. Riley is a propulsive soloist, his bursting fills complimenting Monk’s chording perfectly. Riley explores his instrument’s range fully as a soloist and as an accompanist, developing consistently interesting solos.

The musicians are completely comfortable with the material, and each performance is definitive, easily rewarding repeated listening. The music benefits from superior recording quality as well, it sounds warm and full even on my $20 computer speakers! This is the first jazz cd I ever purchased, and remains a personal favorite. It not only is a perfect introduction to Monk and Jazz, but will reward and delight long time fans of the man and the music. Highly Recommend!

Greetings art aficionados, we’re back with another outstanding piece by artist FRANK MORRISON titled “PRACTICE MAKES PERFECT” which is from his award winning “Cutest Kids” series.

Frank D. Morrison has been called one of the most aspiring artist of his generation. Morrison began his career when in youth as a graffiti artist, which is now termed “Street Art“. During this time his graffiti developed his elongated style and dramatized figures. He captures the essence of his subjects in his paintings. —Grandpasart.com 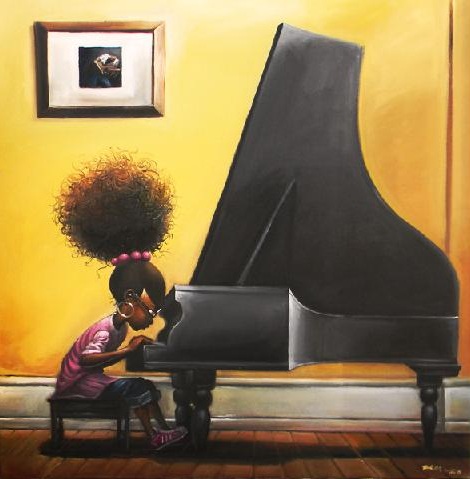 Greeting’s jazz enthusiasts, I’m back with five more invigorating selections featuring Orrin Evans, Stefon Harris, Cannonball Adderley, Manu Katché, and Maurice Brown from the sea of infinite treasures in music to expand the provocative and youthful voices as we encounter them on this wonderful musical exodus of tantalizing yet satisfying blend of original jazz that’s shaken and stirred to perfection from the shelves of “Flux Music Essentials.” 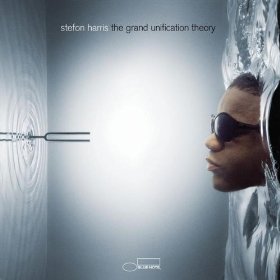 Stefon Harris pulls off a stunning record for Blue Note Records here with his musical epic “The Grand Unification Theory”, a theme-based album observing the cycle of life (both physical and metaphysical). This music is easily accessible on every track, and would have to be viewed as an interaction between freedom and structure. Every selection on this album will one day be viewed as a classic. 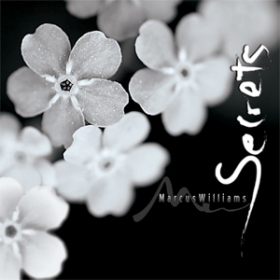 The horn the music the sound of Marcus Williams, experience a new style of smooth jazz and funk fusion on Marcus’ new album, Secrets. Listeners get silky soulful vocals fused with his sensual muted trumpet. Add to this mix, his signature jazz, R&B flavor and the result is a CD likely to please any smooth jazz fan.

The multi talented composed, performed and arranged the who CD, recording we done in his private studio in Bali Indonesia and the brilliant CD cover was created by none other than Ika at Ikaart & designs. The featured song “Sit Beside U” Has become an hit with smooth jazz fans garnering more smooth jazz radio play! Touch me is also a major favorite with the jazz audiences and has been feature on several smooth jazz stations.

Marcus is a one of a kind artist, he has the ability to find just the right production that fits for his style and can create this from top to bottom alone! He knows what he wants and he does his thing and makes it come to life. He is truly an amazing artist! If you are a jazz lover and you are looking for a fresh sound then this CD is for you. Now available at the M-Tunes store as a CD or CD Download.

At your leisure, visit http://www.mywpmusic.com/ for more details about Marcus Williams.