Greetings jazz aficionados, it’s a pleasure to be back with five more spellbinding jazz titles from the shelves of Flux Music Essentials! The following recordings fit perfectly into the mold of what I view as being the usual suspects … at least from my perspective. Although similar in context, these gems where originally recorded to create an atmosphere with just enough complex nuances and innovation painted on the canvas to make these jewels a worthwhile listening experience. 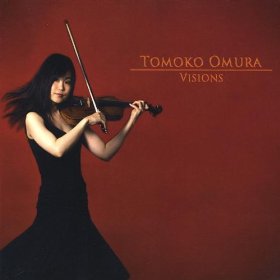 “Visions” is a tribute to seven of the finest jazz violinists of all time, and in it, Tomoko does more than just honor these gentlemen … she really gets to the emotional core of what makes each of them tick as players. Her compositions are lovely,well-conceived tunes that are played blazingly by her crackerjack band, and especially by Tomoko herself.

Optimism Shaw’s second album as a leader is a worthy follow up to his debut album Perspective, which was released in 2004. On optimism you get most of the same players returning that played on his 1st album. The young & very talented guitarist Lage Lund, winner of the monk competition for guitar in 2005 & Julliard educated is on the front line with Shaw mostly suppling a melodic voice in the Peter Bernstein/Jim Hall school of beautiful clean tone. On piano & keyboards is none other than Robert Glasper a key player in the jazz/hip hop hybrid sound of the 21st century, Glasper has some great solo moments here on piano. On acoustic bass is Joe Martin a NYC mainstay who’s played with Kurt Rosenwinkle on his newest live album The Remedy – Live At The Village Vanguard, toured with Jonathan Kreisberg & also a bandleader with two excellent albums to his credit his newest Not by Chance. Last but not least is the killer drummer Jonathan Blake who’s played with everyone on the NYC scene & is Shaw’s regular drummer. This album definitely falls into the new modern jazz category with overtones of hip hop & soul combined with a post bop melodic & harmonic sense. The opening tune The Flipside is my personal favorite, a hard swinging tune with a knotty arrangement & a great melody. Shaw does a nice grooving version of the well traveled standard Love for Sale with guest trumpeter Jeremy Pelt.

On the song Flight you get slamming back beats & chilled out fender Rhodes. All in all I would say this is a most enjoyable album with something for everyone, the band is a top self ensemble with some of New York’s finest young players. If you enjoy this album you should also check out Shaw’s debut album Perspective. —Anthony R. Guarriello | Amazon.com

There are things about this album that take your breath away. To begin having been a Metheny fan for about a decade this was “just another good album.” Cool, great sounding, a departure but just great sounding, but then I listened to “To The End Of The World” and was knocked on my butt! I can’t put into words how I felt.

It gets better. My one year old son was very hyper and it was hard to get him to settle down. One day I was sorting clothes for the laundry and decided to listen to We Live Here to pass the time. Here to Stay comes on and my son freezes. He’s focused on the speakers now. By the time he “To The End..” is finished he’s sleep! From that point on he wouldn’t go to bed without me turning on We Live Here in his room. It was his music.

Then I bought the DVD of the Japan concert from the same album. He and my infant daughter went through two copies of it!

I could go on about the inspirational stories from this album. There’s something about this album (esp. “To The End…” that magnetically draws people to it like addicts. Once I play “To The End…” they’re hooked.

You owe it to yourself to give it a try. Buy it used for a couple of bucks if you have to. You’ll feel like you really hit the jackpot. —Edgar Watson | Amazon.com

Kurt Elling is the greatest voice to come long since the late great Nat King Cole (And much dismay of most jazz lovers, I think if Kurt ever were to record The Christmas Song I would prefer it, but that’s just me). Also don’t hate for this, but I think that Kurt has (to me at least) eclipsed Ol’ Blue Eyes, Frank Sinatra, in vocal quality, style, and emotion. The man is one of the greatest singer/song writers I have ever heard. Writing great hits like Delores Dream, based on a Wayne Shorter Broadway hit, (hide the) Salome’, a fatal attraction spoof of sorts, and the perfect Never Say Goodbye, an uplifting love song.On the down side, which is hardly there, There is only one song that features the Guitar which is a favorite of mine. and a song or two, MIGHT, mind you MIGHT, get a LITTLE old with all of the scat IF, mind IF, you are NOT used to it. Other than that, it would be utterly ludicrous to think anyone you could ever get tired of this masterpiece of the great Kurt Elling.Also Featured is the Musical Talent of Eling’s best friend, Laurence Hobgood, piano, who wrote a great deal of the songs with Kurt, Rob Amster, bass, and Paul Wetico on drums. The three of them spontaneously wote the music to Married blues among others. Also the great Von Freeman plays sax on Salome’. I think tis is the perfect opening for the singers career and it seems as though others agree seeing that it was nominated for album of the year by the Grammies of 1995, a rare honor for a debut album.

I also recommend his other two albums, The Messenger, and This Time It’s Love, Along with with Carl Doy’s new 2CD wonder Moonlight Piano which, although it is an instrumental, provides the same feel of the album. I would say that if you don’t have this album. BUY IT! NOW! okay? Cool. It’s good that we can talk through these things. Well, God bless. —Amazon.com

E.J. Strickland Quartet - In This Day

On his debut release as a leader In This Day (available May 19 on Strick Muzik), drummer & composer E.J. Strickland introduces his quintet & his music in a variety of textures, moods, & contexts. Over the years, he’s been noted as a key sideman for saxophonists Ravi Coltrane & Marcus Strickland, a five-year stint with guitarist Russell Malone, and a freelancer with many other artists such as George Colligan, Lizz Wright, Freddie Hubbard & The New Jazz Composer’s Octet, and Cassandra Wilson. Now, with an engaging cast of players, the culmination of his experiences is documented on his debut CD.