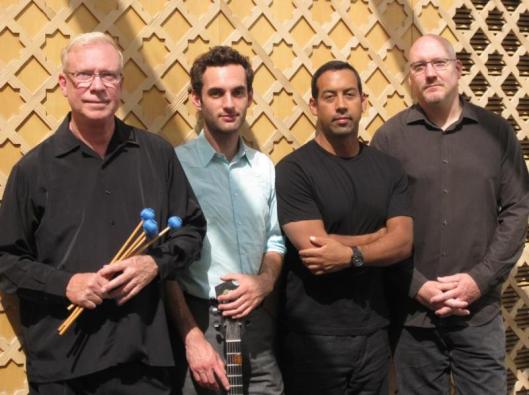 The New Gary Burton Quartet, featuring guitarist Julian Lage, bassist Scott Colley, and drummer Antonio Sanchez, is set to perform at Blue Note on October 19-24. The week long engagement will serve as the North American debut for the group, which made its world premiere at the Red Sea Jazz Festival in August 2010.

For over five decades, Gary Burton, the Grammy® award winning vibraphonist and former Berklee College of Music Executive Vice President, has crossed musical barriers and generations with his innovative ensembles. His quartets have featured a unique mix of established musicians while discovering and showcasing younger musicians, many of whom would soon become some of the world’s most recognizable artists. Musicians such as Larry Coryell, Jerry Hahn, Mick Goodrick, Pat Metheny, Tiger Okoshi, John Scofield, Kurt Rosenwinkel, and most recently Julian Lage, began their careers in Burton’s esteemed quartet. END_OF_DOCUMENT_TOKEN_TO_BE_REPLACED

Greeting’s jazz enthusiasts, although it was a short week like you I’m excited that Friday has arrived. Viewer Mark Beckmanfrom Seattle turned me on to this project, therefore I decided to spend some time with the talented Joe Locke on vibes and a extremely gifted Geoffery Keezer on piano caught Live in Seattle as the featured album for the weekend spin. Great jazz, weekends & you linked together is the perfect collaboration, please do have a bless and safe one! —Rob Young | The Urban Flux

Geoffrey Keezer’s trio (with Mike Pope and Terreon Gully) are joined here by Joe Locke on vibes for an intense live performance at the Ballard Jazz Festival in Seattle.

Ballard, a Seattle neighborhood that formerly boasted two regular jazz venues but now has none, is a traditionally Scandinavian enclave. That part of the world has always supported this music, so the venue is still appropriate. What transpires here is great individual playing and tight group interaction. Keezer has been one of the best young keyboardists for several years, and is heard here on electric instruments as well as his more familiar acoustic one. Mike Pope is solid and collaborative as always, and Terreon Gully is among the most interesting and innovative of what is an outstanding cadre of younger jazz drummers. END_OF_DOCUMENT_TOKEN_TO_BE_REPLACED