Greetings jazz aficionados, it’s almost unbelievable that we’ve just about made it to another weekend! Today, I’ve hassled up a fabulous album by a terrific drummer from Cali named Roland Vazquez for the Weekend Spin featured album. Now for those who haven’t hear his music before that’s because he’s probably the jazz world’s best kept secret. His album “Further Dance,” from 1997 has certainly proved his durability as a season artist as this record has absolutely stood the test of time. If dig jazz evenly coated with the proper elements of Latin grooves tightly woven with some serious toe tapping funk as reinforcement and accented with spicy melodies over the top then chances are you will indeed enjoy this keeper by Roland Vazquez. —Rob Young | The Urban Flux 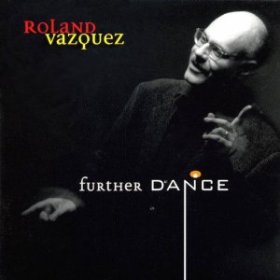 Originally from California, composer/drummer ROLAND VAZQUEZ decided to become a musician at a performance by the Mongo Santamaria Band in 1963. Soon after high school, he began working as a drummer with R&B and rock bands in and around L.A. He began the study of music at Pasadena City College and, while working mostly with touring R&B bands, he eventually completed his Bachelor of Music at Westminster College in Utah (’75). Back in LA, he began composing for his first jazz fusion band – eventually forming the “Urban Ensemble” (’76). As a member of Clare Fischer’s all-star band “Salsa Picante” (‘78-81), he played on that group’s Grammy winning “Salsa Picante 2+2.”

After receiving an NEA Jazz Performance Grant in 1977, he decided it was time to record; his first international release, “Urban Ensemble: The Music of Roland Vazquez” (Arista/GRP‘79) was called “a decade ahead of its time” by Billboard Magazine. After moving to NYC in 1981, he continued to develop his “funky-salsa-bebop” style with unique compositions for octet, quintet, and big band. Many of these works are featured on his subsequent recordings “Feel Your Dream” (’82); “The Tides of Time” (’88); and “No Separate Love” (’91). These albums, as well as “Best of the L.A. Jazz Ensemble” (‘94) – a compilation from 1977 “Urban Ensemble” sessions- collectively feature performances by a veritable “who’s who” of East and West Coast contemporary jazz artists.

While living and working in NYC, he was invited to attend Manhattan School of Music on a merit scholarship and received his Master of Music in ’85. Later, as a member of the Manhattan School of Music Jazz Faculty (’88-’98), he taught Jazz Combos – and initiated a Latin Jazz Big Band in ‘97. Vazquez’ ’97 Quintet CD, “Further Dance” was possibly the first audiophile 20 bit “live to 2-track” Jazz CD; recorded by Todd Whitelock (Sony Classical); co-produced with Shirley Walker (film-composer); and this CD was called “a brilliant document” by jazz-writer Bill Milkowski (Audio). —Amazon.com