Ottawa singer-songwriter Kellylee Evans is entering the next phase of her music career with her sophomore album, Good Girl.

The alt.-soul pop recording follows her 2006 critically acclaimed urban-jazz debut, Fight or Flight, which helped garner the Toronto native Juno and Gemini award nominations in 2007 and a win for best female artist at the Canadian Smooth Jazz Awards. Good Girl was written and produced by Kellylee at Audio Valley Recording Studio in Perth, Ontario, with the help of engineer and co-producer Steve Foley and her trusty touring band since 2005.

“With my last CD, which I did back in 2004, I felt that I didn’t get a chance to get a lot of my ideas out. I wanted that opportunity this time to see where the songs would go on my own,” she says. “The song ‘Good Girl’ is about not wanting to live up to anybody else’s expectations. The whole album is about being true to yourself and the idea of trying to please everybody around you. It’s just this desire to not be anybody’s good girl.”

From the reflective “Questioning My Path” about searching for one’s identity to the aforementioned inspirational groove “Good Girl,” and playful eye-opener “Tonight” about not wanting to fall in love with someone, many of the new songs deal with obsession of one kind or another and an ever-evolving stance on things big and small.

“If I just look at simple things, like a month ago I didn’t wear make up and now I do everyday. A few years ago I was told I was allergic to fragrances and so I didn’t use anything that was scented and now, everywhere I go, I’m looking for a perfect scent to wear,” she chuckles. “And there are still people in my life who I haven’t seen in a while who are like, ‘Oh Kellylee, you’re eating meat. You were the biggest vegan!’”

Greetings jazz aficionados, thanks for dropping by The Urban Flux at WordPress.com. Each week we explore together the intricate sounds of stimulating and innovative jazz that awaits us on this massive canvas in cyberspace. With each visit you’ll discover a montage of new jazz releases featured that encompasses a generous diet of nuances which includes a wealth of complex and distinctive styles, textures, melodies, and rhythms exalted by a host of definitive and creative voices in the world of jazz.

New Jazz Releases this week at The Urban Flux:

At your leisure visit Amazon.com, for more details about Imports, Vinyl, Soundtracks, and Re-issues.

With CTI Records having gone independent in 1970, founder Creed Taylor celebrated the early success of the label with a one night only concert at the Hollywood Palladium on July 18, 1971.

California Concert: The Hollywood Palladium is newly remastered from the original two-track analog tapes and is the most complete version of the legendary concert ever released. This 2-CD set doubles the content of the original five-song LP release with five additional tracks – three of them previously unreleased – and restores the original concert sequence for the first time.

Greeting’s jazz connoisseurs, it’s great to return with another intriguing palette of creative music from some of today’s most unique, adventurous and inspiring voices known and unknown artists alike in the world of jazz.

mr. redman gives us an outstanding jazz session on this album. the first three tracks (“courage,” “belonging,” and “neverend”) draw us into a solid neo-bop atmosphere. mr. redman has obviously grasped the lessons of the masters. one hears the echoes of sonny rollins, dexter gordon, and hank mobley as mr. redman weaves and dances through these songs. all the while, though, mr. redman continues to give us his own voice. he swings and sings throughout the album with high energy. the album really hits it stride on the lengthier selections in the middle (“leap of faith,” “balance” and “twilight”). here we get to hear mr. redman stretch out and never meander, never lose focus as he developes his themes with style and grace. moreover, his support really shines through. aaron goldberg is a find on piano. just dig his soloes and comping throughout, you’ll want to find more by him. also, hearing mr. redman and mark turner together is a real treat (“leap of faith”). finally, mr. redman shows his mastery of all the major saxes. his work on alto and soprano throughout are outstanding. the only gripe is that i wish he would dabble with some of the adventuresome spirit of his father, dewey redman. son joshua obviously has the ability to explore, it’d be nice to hear the results. —p dizzle | Amazon.com END_OF_DOCUMENT_TOKEN_TO_BE_REPLACED 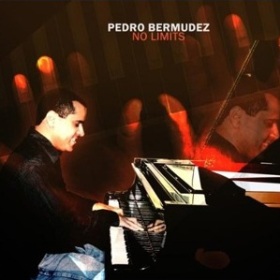 The energy contained in the body and soul of pianist Pedro Bermudez far exceeds that which may normally be given mere mortals. For his hands and arms are infused with a surfeit of tumbao. In his heart, the echoes of the timbales and the congas bounce excitedly against every internal surface. It is this incredible treasure of rhythm that flavours what he expends through his fingers on the ivories. More importantly, it is this that provides impetus for him to expand his energy like the ripples in a still sea that he plunges into with all the incredible weight of his skills in every aspect of Afro-Caribbean music. This is why his energy is so infectious and cannot be contained in a smaller ensemble, especially not on No Limits, an album that sits somewhere between the Atlantic islands of Puerto Rico and the deepest part of the Caribbean, in the eye of the Afro-Caribbean Hurricane of sorts, so to speak.

Although his proclivities tend more towards urban jazz with a Latin tinge, Bermudez has too much tumbao in his heart and hands to pass up on the Latin idioms and forms altogether. However, in the context of the larger ensemble, this rather tends to be buried and will only come to the fore on charts where his piano is sparingly accompanied by a thick layer of percussion, such as on songs like “El Jarriero” where Richie Flores and Vince Cherico provide that thunderous bed of ritmo, or in “Bombaião” where the exuberant percussion of Duduka Da Fonseca creates dancing rhythms from the Northeast of Brasil. It is then that Bermudez lets it all hang out and appears to fall prey to the charms of his alter ego—that one that lets all control go and when tumbao sets in. —Raul da Gama | LatinJazzNet.com

At you leisure, check out the complete review by Raul da Gama.