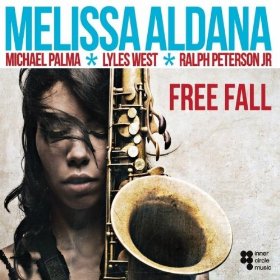 Melissa Aldana lives through her tenor saxophone. It has become part of herself as a vital organ. With FREE FALL she has created an allegory of 9 chapters documenting her personal journey from her birth place Chile to Brooklyn, New York where she lives today.

“Free Fall” is a pure mix of jazz improvisation rooted deep in the tradition and compositions that are taking the music in a more modern direction. This amazing quartet is controlled by young and experienced hands alike. You can feel the air of New York clubs exhaled with a new spirit and virtue. Aldana captures Coleman, Rollins, Parker and Garzone reinvented and regenerated. It is an unpredictable journey through the emotions and intricate harmonies that are transformed into evocative melodies in the delicate hands of Melissa.

“Free Fall” is pure jazz, pure emotion. It is the wisdom of the classics mixed with the young innocence of this fresh new voice. It is the music of the street and of her journey over time in essence.

In this endeavor, Melissa has not been alone. She is accompanied by some of the great musicians of the American scene with drummer Ralph Peterson Jr. (Count Basie Orchestra, Branford Marsalis, Michael Brecker), bassist Lyles West (Dizzy Gillespie, Don Cherry, Clifford Jordan) and pianist Michael Palma (Wynton Marsalis, Chris Potter, Adonis Rose and Paquito D’Rivera). The project was recorded at the legendary Systems Two Studios, historical New York studio where Ravi Coltrane, John Coltrane’ son, donated the microphone that his father recorded the legendary “A Love Supreme”. Michael Marciano, owner of the studios, gave Melissa the honor to be able to have this unique piece for the recording.

A journey that began in 2006 when she traveled to Boston without a dollar in her pocket, not knowing the language or anyone in town to help her start a new life at the Berklee College of Music. Because of her talent, Melissa was awarded with the Berklee Presidential Scholarship, the most important scholarship of the institution.

The passage through Berklee was the trigger for her creativity and her inner music. As a student she has taken lessons with Joe Lovano, George Garzone, Frank Tiberi, Greg Osby, Hal Crook, Dave Santoro, Bill Pierce, Dino Govoni, Ralph Peterson, among others. During her time in Boston she met sax legend George Garzone that put her in touch with Jorge Nunez (executive producer and manager) and Greg Osby, director of Inner Circle Music, a label that brings together the best young jazz talent in the U.S.. Another key figure in the history of Melissa is Emilio Lyons. The famous “doctor” of saxophones has introduced numerous saxophonists to Melissa. Among these is the great George Coleman, who welcomes Melissa as a disciple and begins to transmit his knowledge in private master classes with her.