Introduces A New Band and Album
Tirtha on ACT Music
On March 8, 2011 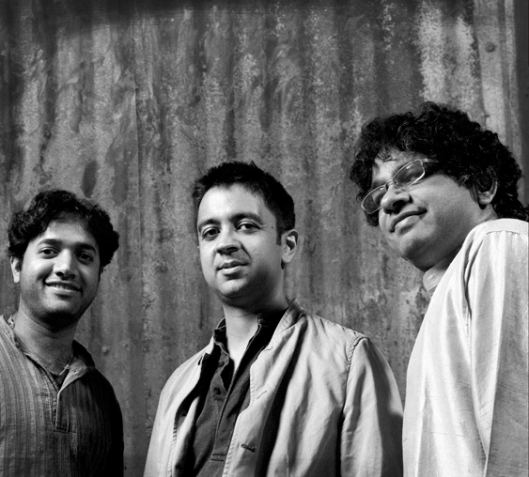 The Sanskrit word t?rtha (THEER-tha) literally means a ford, or a shallow place in a river that can be easily crossed over. Within a spiritual context, tirtha denotes a holy place near a body of water —somewhere where everyday struggles fall away, and where one passes easily into a deeper and more profound state of being. Aptly, Tirtha is now also the name of a phenomenal trio featuring three powerhouse musicians who at once honor and traverse the streams of tradition. It is also the name of their exciting new album on ACT Music.

In his album notes, the award-winning Iyer describes the group’s genesis:

“Tirtha (the band) formed in response to an invitation. In 2007 I was asked to put together a concert celebrating 60 years of Indian independence. Normally I’ve steered clear of fusion experiments that attempt to mix styles – to “create something,” as John Coltrane famously admonished, “more with labels, you see, than true evolution.” For this event I hoped to avoid those pitfalls, and offer something personal.

“I invited along Prasanna and Nitin Mitta, two outstanding musicians from India who have settled in the States. None of us had collaborated previously, but at our first rehearsal we felt a jolt of recognition. There was no question of “fusion,” no compromise, no attempt to sound more or less “Indian”; just a fluid musical conversation among three individuals, an atmosphere of camaraderie, a sense of beginning.”

Prasanna continues the thought from his unique vantage:

“Tirtha is a logical extension of what I have been doing for many years in my own way – looking at global music today from the perspective of a Carnatic [south Indian classical] musician and looking at the rich tradition of Carnatic music from a contemporary Jazz/Rock/Classical musician’s perspective. In a trio that fosters as much space as Tirtha does, these concepts take on a musical life that is shared with a unique synergy. Music eventually finds its own simple solution.”

These artists’ musical and cultural experiences are part of their creative DNA. Immediately, for example, you hear the distinctly South Indian, meticulous ornamentations of Prasanna’s guitar in dialogue with Iyer’s gloriously spacious harmonic palette, and Mitta’s superbly crisp Hindustani (north Indian classical) grooves and virtuosic, grounding presence. You hear familiar structural elements of jazz, Hindustani, and Carnatic music. However, the group completely shuns any musical clichés or previously heard “fusions” of those genres.

Instead you hear a band with ideas: the Reich-like rhythmic shifts of the driving opener “Duality”; the rhythmic vocalizing and drummed responses on “Tribal Wisdom”; “Abundance,” an Ellingtonian hymn with Carnatic nuances; the surprise post-punk anthem “Gauntlet”; the subtle majesty of the title track; the shimmering melodies of “Entropy and Time.” The pieces (alternately composed by Iyer and Prasanna) methodically open up to reveal the beating heart of the band’s improvisations: dynamic, astonishingly alive, with a deep sense of purpose.

Tabla player Nitin Mitta describes what the band means to him:

“The Great Vocalist Ustad Amir Khan once said music is something which the Soul speaks and the Soul hears. Tirtha to me is this spiritual journey. Music is universal and Tirtha is a true example of this; a combination of Jazz, Carnatic and Hindustani, elements of each merging together to evolve into music with no tags. I have never felt more challenged thus far in bringing out my creativity as I do with Tirtha.”

Tirtha at once acknowledges and celebrates its diverse heritages, and yet is not restricted or easily reduced to any stereotypes about who these musicians are—or who they “should” be. What the band offers instead is an impassioned and beautiful act of self-definition.

“For us Tirtha represents a unity that only recently became possible, after several decades of South Asian global mobility, transition, and flow: it’s the sound of a new reality.”

‘Entropy and Time’ is based on the pallavi ‘Raghukula’ in raga Bilahari, composed by T.R. Subramanyam.

Composer-pianist VIJAY IYER is one of today’s most acclaimed and respected young American jazz artists. He received the Musician of the Year Award in the 2010 Jazz Journalists Association Jazz Awards, the 2010 Echo Award (the “German Grammy”) for best international ensemble with his trio, and the Downbeat Critics Poll for rising star jazz group of the year. His latest recordings on the ACT label include Solo (2010) and the trio album Historicity (2009). Historicity was named jazz album of the year by The New York Times, the Chicago Tribune, the Los Angeles Times, National Public Radio, the annual Village Voice jazz critics poll, and the Downbeat International Critics Poll. Historicity subsequently received a Grammy Nomination for Best Jazz Instrumental Album. In the past decade, Iyer has won the Downbeat Poll in multiple categories, the JJA Jazz Award for Up & Coming Musician of the Year, the CalArts Alpert Award in the Arts, the New York Foundation for the Arts Fellowship, and numerous composer commissions.

PRASANNA has carved a niche for himself as a singular force as a performer and composer in today’s music world. He is a pioneer in performing the traditional art of Carnatic music on the guitar, a respected guitarist in contemporary Jazz, Rock and Blues, a composer for an Oscar winning film, and President of India’s first professional college for contemporary music. Prasanna has performed and recorded with Airto Moreira, A.R. Rahman, Joe Lovano, Victor Wooten, Hariprasad Chaurasia, Esperanza Spalding, Alex Acuna, Dave Douglas, Umayalpuram Sivaraman, Omar Hakim, Illayaraja, Larry Coryell, Anthony Jackson, Howard Levy, Trilok Gurtu and others. Prasanna’s prolific body of work as a leader include 15 albums, a concert DVD and an Instructional DVD, collaborative albums with Raga Bop Trio, Aka Moon and more. He is a member of two critically acclaimed trio projects – ‘Tirtha’ with Vijay Iyer and Nitin Mitta and ‘Raga Bop Trio’ with Steve Smith and George Brooks.

Prasanna has composed music for documentary films such as the 2009 Oscar Award winning ‘Smile Pinki’ and feature films like ‘Framed’ and many others. His creative collaboration with two-time Oscar winning film composer A.R. Rahman includes arranging and orchestrating the title score of the 2002 Oscar nominated Bollywood Film ‘Lagaan’ and numerous other guitar playing sessions. Prasanna has also worked with many top Indian film composers on dozens of soundtracks.

Prasanna has given lectures, workshops and residencies at Banff Center for the Arts, Berklee College of Music, Harvard University, Sloan School of Management, Arizona State University etc. He holds degrees in Engineering and music from the Indian Institute of Technology and Berklee College of Music, respectively. Prasanna’s passion for music education led him to establish Swarnabhoomi Academy of Music, India’s newest and largest college of music with a world-class international faculty and a sprawling 4-acre campus near Chennai, India .

NITIN MITTA is one of the most prominent young tabla players in the world of Indian classical music. He has quickly established a reputation as a player with a rare combination of technical virtuosity, spontaneity, clarity of tone, and sensitivity to melodic nuance. He is a highly sought after accompanist having performed with some of India’s most celebrated musicians, such as Pandit Jasaraj, Pandits Rajan and Sajan Mishra, Pandit Vishwa Mohan Bhatt, Ustad Shahid Parvez, and Srimati Ashwini Bhide, just to name a few. As a soloist he has performed at many prestigious organizations in India.

Nitin’s gurus’ include Pt. G. Satyanarayana and Pt. Arvind Mulgaonkar, both of whom were disciples of late Ustad Amir Hussain Khan Saheb, legendary doyen of the Farukhabad Gharana.

Nitin maintains a busy schedule of performances and tabla workshops, traveling throughout the U.S., Europe, Canada and India. He has performed at several prominent venues including the Habitat Centre in New Delhi, the Nehru Centre in Mumbai, the Metropolitan Museum of Art and Indian consulate in New York, the Smithsonian Museum in Washington, D.C., and a variety of college campuses. He is featured on the Music Today album Soul Strings.