I’m looking forward to this … 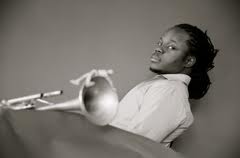 On April 5, trumpeter-composer Ambrose Akinmusire will release his tour de force Blue Note debut, When The Heart Emerges Glistening. Co-produced by Akinmusire and his label mate and mentor Jason Moran, the 12 song set (10 of which were composed by Akinmusire) features his quintet-tenor saxophonist Walter Smith III, pianist Gerald Clayton, bassist Harish Raghavan, and drummer Justin Brown-a close-knit group of longtime friends and frequent collaborators that breathes a remarkable collective identity. The New York Times wrote that the quintet “seems destined for much wider recognition, ” and described their unique sound as “limber, straight-ahead jazz with mystery and pop instincts that gets around most of the old, pervasive mainstream influences, both of trumpet playing and bandleading.”

The Los Angeles Times recently named Akinmusire one of their 2011 “Faces to Watch, ” and offered this descriptive of the quintet’s recent LA performance: “Akinmusire and his band demonstrated a remarkably fluid, adventurous interplay and patiently imaginative way with melody that sounded as steeped in the music’s history as it was hard-wired with the sound of something new. With a chameleonic tone that can sigh, flutter or soar, Akinmusire sounds less like a rising star than one that was already at great heights and just waiting to be discovered.” END_OF_DOCUMENT_TOKEN_TO_BE_REPLACED