Kino Haitsma touches the piano (and rhodes) in his own, highly personal way: innovative and groovy, thoughtful and deep. Not to be missed!

My Touch features nine original compositions by Dutch pianist Kino Haitsma, performed by some of Holland’s most outstanding musicians, i.e. Jeroen Vierdag (bass, Ploctones) and Hans van Oosterhout (drums, Toots Thielemans). All songs were recorded with just piano (or Rhodes), bass and drums and have a fresh approach to the traditional piano trio. Intentionally avoiding (seemingly) endless displays of improvised virtuosity, Kino chooses to put the piano in a different perspective, using compact, tight ensemble-work (highlighting his fantastic rhythm section) and often quite catchy themes, while at the same time showing a profound and emotional, thoughtful quality. Stylistically the songs range from danceable jazz-house to odd-measure experiments while remaining very listenable. Something for the mind ánd the soul…

“What I really like about Kino’s playing is he doesn’t overplay, he’s not concerned with how fast he can play a scale or displaying how technically proficient he is. This is refreshing in todays marketplace of pianists, many who seem to be only interested in the technical aspects of a performance. It’s obvious that Kino feels the groove is important and that technique is merely a means to an end and not the end in itself. This album is a nice mix of piano and Rhodes led tunes that are very well played. The material is well suited for his musical vision and I commend him in this effort.” —GEORGE DUKE 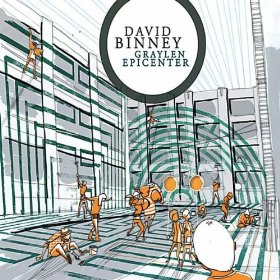 It was only a few years ago I had the pleasure of being introduced to an album titled “FREE TO DREAM,” (1999) by this exceptional composer and saxophonist from Miami (via Southern California) named David Binney. Since then, I’ve regrettably fallen off course and haven’t seriously pursued the opportunity to become more familiar with the music of this amazing artist with any frequency … that’s until I finally come to my senses and decided to dive head first into his phenomenal new project “GRAYLEN EPICENTER.”

At first glance, while listening I skimmed through the superb line-up summoned by Binney to record this outstanding album I knew immediately that I was in for an impeccable journey! As I embrace this new frontier I dare not deny myself a chance to embellish what might very well be one of the top jazz recordings of 2011?

“All of Time” the opener takes the art of innovation into a new dimension on this extensive palette of groundbreaking music. From the onset, as the compositional architect of this project Binney shapes this gem by flexing his improvisational skills as an inexhaustible player by hurling inferno of abstract notes and rigorous tones from the core to eventually become envelope sonically by the lively interplay of this persistent ensemble features the gifted Gretchen Parlato vocally. END_OF_DOCUMENT_TOKEN_TO_BE_REPLACED

“Jensen writes in three dimensions, with a quiet kind of authority that makes the many elements cohere. Wayne Shorter, Maria Schneider and Kenny Wheeler come to mind.” –Downbeat Magazine

For the past ten years, saxophonist and composer Christine Jensen has cemented herself as one of Canada’s most acclaimed female composers. Thus far, her career includes a catalog of compositions as a leader for small ensembles, and a role as a co-leader in the more recent configuration of Nordic Connect– a group formed with her sister Ingrid Jensen and Swedish pianist Maggi Olin. However, it was in the ’90’s, while Jensen was still an undergrad, which she really started to establish herself as a composer. During this time, she found prominent success after composing the title-track for her sister’s debut album, Vernal Fields. The effort went on to win Jensen a Juno Award (the Canadian equivalent of a Grammy) and it was this early recognition that compelled her to keep writing.

Fast forward to 2011, and Jensen is presenting her debut effort for Justin Time Records, Treelines, a collection of works performed by her 18-piece jazz orchestra, featuring some of Canada’s most progressive improvising musicians. Treelines adds another layer to Jensen’s progression as an artist and composer, who is well known for writing specifically for the musicians she plays and records with. Her ability to create intimate dialogues amongst the players within the context of her compositions makes her work a pleasure for musicians to play. During the Treelines recording sessions, she collaborated with special guests on the repertoire, including her sister and acclaimed trumpeter Ingrid Jensen and saxophonist and composer Joel Miller. The textures and orchestrations throughout the album are representative of the strong influence of artists like Maria Schneider and Jim McNeely. The comparison to Schneider’s music, specifically, is apparent while listening to Jensen’s entire catalog of music. However, Jensen has retained a unique style over the years and Treelines is no exception. END_OF_DOCUMENT_TOKEN_TO_BE_REPLACED