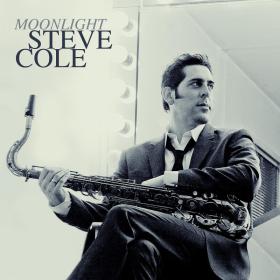 Saxophonist Steve Cole is one of the most celebrated players in contemporary jazz, having sold hundreds of thousands of albums worldwide and scored four #1 R&R Smooth Jazz hits. With five CDs in his catalog for Atlantic, Warner Brothers and Narada Jazz, Cole kicks off a new multiple-album deal with Mack Avenue Records/Artistry Music by releasing Moonlight, a collection of classic pop songs and standards set against an orchestral backdrop. The project includes such iconic songs as Burt Bacharach’s The Look of Love, the classic torch song Cry Me a River, Lennon/McCartney’s The Long and Winding Road, the Guess Who’s Undun and James Taylor’s Close Your Eyes.

With his gorgeous, classically trained tone and an ear for lyrical melody, Cole most closely resembles a vocalist, emphasizing interpretive phrasing and direct emotion. On Moonlight, he has found the perfect setting for this bel canto technique-a symphonic orchestra playing inspired arrangements by Michael Cunningham, making his splashy major-label debut as an orchestral arranger. In addition to the strings, the arrangements include tastefully placed harp, woodwinds and tempered brass. The supporting rhythm section is composed of Mike Logan (Will Downing) on keyboards, Russell Ferrante (Yellowjackets) on piano and Steve Rodby (Pat Metheny Group) on bass.

At the heart of this project is the title track, which appeared in the 1995 film Sabrina. “I saw the movie a few years ago and heard that song,” Cole says, “and it was just delightful-after all, it was written by [legendary film composer and arranger] John Williams, and I thought, ‘This has all the elements I’m looking for.’ So I just sort of indexed it away, and when I started thinking about this project, I was searching for music that would be warm and enveloping. That’s when I remembered this song.” (Few others did; this is its debut cover recording).

With Moonlight, Cole comes full circle back to his first success as a young musician, performing with strings and winds. Reenergized by his desire to recapture his roots and impelled by the melody of Moonlight, he has produced a record full of strong emotion and genuine craftsmanship. The interaction of his saxophone with the intimate arrangements has allowed him to create a modern collection of lovely cameos in the classical concerto tradition-while at the same time charting a new direction for the next stage of his career. “For me, it’s always a lot more fun when people get what you’re doing,” says Cole, and in a nutshell that statement describes his approach to music; he has crafted his style with communication foremost among his objectives. Many of the greatest jazz musicians have sought the same goal, from Louis Armstrong to Count Basie to Stan Getz to Miles Davis. And while Cole would not compare himself to any of these giants, he has nonetheless absorbed the basic lesson of their music-reaching beyond his craft to communicate with his listeners.

Steve Cole attended Northwestern University, where he explored modern classical music for the saxophone under the tutelage of internationally recognized educator Fred Hemke. While an undergrad, this gifted musician was a semifinalist in the National Foundation for the Advancement in the Arts and one of three finalists in the Chicago Symphony Orchestra Concerto Competition, awarding him the privilege of performing Tableaux De Provence by Paule Maurice with the CSO. Cole went on to earn his MBA, which paved the way in his being appointed to Professor at the prestigious McNally Smith College of Music-a position he maintains today.

“I am so anxious to have the opportunity to present this new project to audiences in live theater settings where I will have the chance to connect with them in an emotional way, providing a memorable night of music for all to enjoy,” Steve expounds. “The legacy of popular music in an orchestral setting is timeless and I am quite fortunate to be able to present this collection of timeless songs in this fashion.”

The orchestra members tune their instruments, the lights dim, Steve Cole walks onto the stage-and within moments you are immersed in a captivating sonic landscape. “At this point in my career it was important to document something that will be as relevant 10 to 20 years from now as it is today-and it’s quite possible we may have accomplished just that.”