This enthralling album has an incredibly fresh and deep jazz/folk tone. Both the music and the compositions are strong and will inspire you like no other. “Chantale’s music is fun to play and enjoyable to listen to. The best of both worlds!” –Lewis Nash 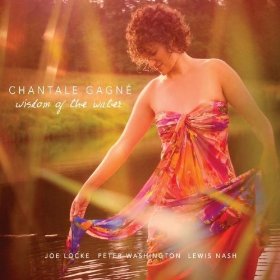 Chantale Gagné - WISDOM OF THE WATER

A native of Quebec, Canada, jazz pianist Chantale Gagné began studying music at the age of 8. At 15, the piano becomes Chantale’s passion.

From 1997 to 1999, she studied jazz piano with James Gelfand at College Marie-Victorin in Montreal, followed by 4 years at McGill University where she received her degree in “Jazz Piano Performance”.

In 2005, Chantale met famous pianist Kenny Barron and although she studied with him for a short period of time, this encounter proved to be so inspiring to Chantale both as a pianist and composer that she realized jazz had become her deepest calling.

For the past years, Chantale has been busy performing in Canada, U.S. and Europe from trio, quartet to piano solo and big bands.

Silent Strength her self-produced debut recording album with Peter Washington on bass and Lewis Nash on drums, has been met with great reviews and features many of her original compositions.

In October, 2008, Chantale is honored by Radio-Canada in receiving the distinction Révélation Radio-Canada Musique 2008-09. This recognition allows her to benefit from a privileged support and from a particular visibility on all the platforms of the public diffuser. She was moreover invited to perform along with Peter Washington and Lewis Nash, during the launch of Espace Jazz.

In 2009, the American jazz magazines, Jazz Times, Cadence and JazzWax.com, as well as the German Magazine, Jazz Podium have been positively reviewing the album Silent Strength.

2009 and 2010 have been decisive as far as Chantale’s growing interest in composition. Wisdom Of The Water, her new album, released in September 2010, demonstrates a totally different sound with a strong folk/heartland influence that she reveals as a composer as well as a pianist. Vibes player Joe Locke is featured on this album along with Peter Washington on bass and Lewis Nash on drums.

You can also check out “SILENT STRENGTH” the previous release by pianist Chantale Gagné and while you’re here take a look at her upcoming Gigs.