At a glance, the talented Herb Alpert can be easily viewed as one of the coolest musicians and shrewdest businessmen in the music industry. As co-founder of A&M Records (with his partner Jerry Moss), Alpert conjured up a massive among of hits to become one of the best selling instrumentalist in history. Fast forward, with his Concord Jazz debut “I FEEL YOU” Herb teams up with his soulmate and the original voice of Sergio Mendes’ Brasil ’66 Lani Hall on vocals to record 14 timeless classics and shape them perfectly to fit their own unique style seamlessly. —Rob Young 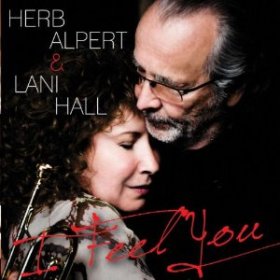 I Feel You is a thrilling collaboration that blends Alpert and Hall’s vocal and instrumental gifts to perfection. The songs cover several reinterpreted classics spanning four decades. Recorded in Los Angeles, it is the duo’s first studio album in almost ten years. The songs selected by Alpert and Hall include such classics as Van Morrison’s “Moondance” and Peggy Lee’s “Fever” as well as two Beatles tunes “Here Comes The Sun” and “Blackbird.” All the songs on I Feel You are filled with unique and innovative arrangements along with skilled improvisations which breathe fresh life into them. Also on the album is a reinvented version of the Tijuana Brass hit, “What Now My Love.”

“Each song is like a flower opening up, exposing new color and fragrance, strength and fragility,” commented Hall. “I think the key to a great song is always the melody and Lani thinks it’s an equally expressive lyric which is one of the reasons we’re a good team. The songs on I Feel You reflect honesty and our mutual commitment to all the songs we do together is to make them sound fresh,” added Alpert. The outcome of their complementary philosophy is 14 songs on I Feel You that marry the essence of their shared gifts. –Product Description

The Cornelia Street Café is a true New York City landmark, an epicurean destination, an artist’s café that cultivates and inspires, and one of the few remaining Greenwich Village bastions for creative music, spoken word, art, theatre, cabaret and much more

Conrad Herwig - Another Kind of Blue (Latin Side of Miles Davis)

With Another Kind of Blue: The Latin Side of Miles Davis, trombonist Conrad Herwig reimagines one of the seminal albums in jazz history – timeless compositions crafted and showcased within the framework of Afro-Cuban and Afro-Caribbean rhythms. It is a companion piece to his pathfinding release, The Latin Side of John Coltrane, and it finds him reveling in the company of featured bandmates who draw inspiration and energy from the spirit of Miles.