As evidenced in headlines throughout the spring, the effects of the April 2010 eruption of Iceland’s Eyjafjallajökull volcano were mostly catastrophic: air travel disrupted, travelers stranded, global commerce stalled. But the repercussions can also be heard, with far more positive results, in the deeply intuitive interactions of the Honey Ear Trio’s debut CD, Steampunk Serenade (release date March 22, Foxhaven Records).

When that infamous ash cloud resulted in the cancellation of a planned six-week European tour for drummer Allison Miller, she seized the initiative and called Honey Ear Trio mates Erik Lawrence (saxophones) and Rene Hart (bass and electronics). “We knew we wanted to make a cooperative trio CD,” Lawrence says, “but with our busy schedules we only had single days in various months, which would have been disconnected and disjointed. All of a sudden we had a month straight where we could rehearse two or three times a week and really try to add content and concepts to the empathy that we already shared.” END_OF_DOCUMENT_TOKEN_TO_BE_REPLACED 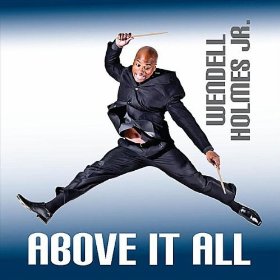 Wendell Holmes Jr. - ABOVE IT ALL

Wendell Holmes, a native of Philadelphia, Mississippi, began playing the drums at two years old; watching his cousin play every Sunday morning fascinated him so much that after each service, he would jump on a drum-set and mimic what he heard, first hand. At home, he played on everything from pots and pans, to his mother’s living room furniture. It soon became evident that this was a gift from God and should be taken seriously. “Playing at church was the greatest start I could ever have because I constantly played and it served as a platform to develop a sound.”

Wendell matured at his craft by becoming an innovative drummer with versatility in playing various genres of music such as Jazz, Fusion, R&B, Funk, Blues, Country, Rock, and Reggae. He soon branched into music directing, collaborating with many musicians (a position rarely filled by drummers).

In 2005, Holmes moved to Atlanta, Georgia; where God continues to do great things in his life allowing him to be a vessel of blessings to others.

Wendell’s artistic uniqueness lies in his distinctive sound, authenticity and creativity. A sensitive, colorful and innovative drummer, he mixes different textures and tones on the drums and cymbals to produce breathtaking colors and images. A versatile musician, he approaches each genre in its authentic context, yet complements it through incorporating various styles in an ingenious manner to create an interesting and innovative sound. His distinctive sound combined with his approach to music complements his expressive creativity. –BIO 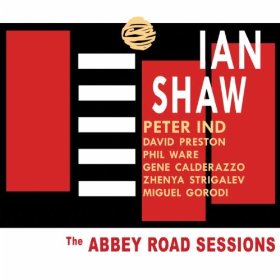 “Best Jazz Vocalist” at the BBC Jazz Awards in 2007 and 2004, Ian Shaw has already amassed a number of highly acclaimed albums and is a popular performer both in the UK and the US. An incredibly colourful character, he has been cited, along with Mark Murphy and Kurt Elling, as one of the world’s finest male jazz vocalists.

His acclaimed 2006 album “Drawn to All Things – the songs of Joni Mitchell” saw him “Praised far and wide as the single greatest male jazz vocalist Britain has to offer” by Jazz Times. This was followed in 2008 by the autobiographical collection co-penned with guitarist and composer David Preston, Lifejacket, also on Linn Records (see below for what the critics said). In the summer of 2009 Shaw recorded his long-awaited solo album, “Somewhere Towards Love” (Splash Point Records), released in early October.

Shaw’s career in performance began unusually for a jazz musician on the Alternative Cabaret Circuit, alongside such performers as Julian Clary, Rory Bremner and Jo Brand. Shaw was spotted by Dave Illic, jazz critic for “City Limits” and was described as “the voice of the decade”.

During the next few years Shaw moved from the singer-pianist format to working with his new band to an eventual move into jazz. Shaw has toured extensively in the UK – regular venues include the Purcell Room, Queen Elizabeth Hall, Blackheath Concert Halls, Ronnie Scott’s, The Vortex, the Jazz Café and The Barbican. Ian has played at all of the major jazz festivals in the UK including Cork, Brecon, Liverpool, Birmingham, Edinburgh (where he was nominated for a Perrier Award), Grimsby, Glasgow, Cheltenham, Scarborough, Swanage and St. Ives. –Ian Shaw | BIOGRAPHY