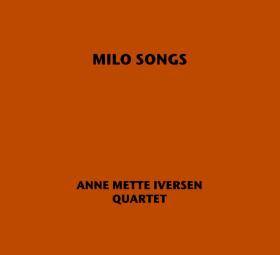 On May 24, Brooklyn Jazz Underground Records will release the latest burst of creativity and beauty from the fertile and imaginative mind of bassist/composer Anne Mette Iversen; with a little help from her young son, Milo. All of the music on Anne Mette Iversen Quartet – Milo Songs, grew from a little melody that Milo made up when he was two, which can be found in all of the compositions on this album. The music reflects on, and pays tribute to, a child’s world, through the exploration of his experiences and perspective. Each composition aims to tell stories about the life of a child, such as the turbulence of a new sibling in the home, the ability to exclude the world around you, the intense focus on something seemingly unimportant to others, the fantasy world, the stubbornness, the strong will and fight for ideas and wants, the dreams shared with mom in the morning, and so forth.

During the recording and completion of the album, Milo Songs also became an affirmation and celebration of successfully juggling motherhood with the demands of being a professional jazz musician. Iversen explains further, "When I went to The New School many teachers would say to me, don't have kids if you want to be a musician. It always bothered me a bit and the idea that it would not be possible to have a family and be a professional musician at the same time was provoking to me. On top of that – this was being said to me in a country where the general idea is that one can do whatever one wants if you work hard enough at it. So, in some ways, Milo Songs is a reaction to that statement, and my way of proving that, of course, it can be done! And, for me personally, there's no doubt that my family and my music feed off each other and inspire each other; they are interdependent and my music wouldn't live without the other side: the family.

The Anne Mette Iversen Quartet, featuring John Ellis (tenor saxophone, clarinet), Otis Brown III (drums, cymbals) and Danny Grissett (piano), has gained a reputation for their consistently engaging live performances, and for being true to jazz music in spirit, feeling and originality. They do not necessarily “play” the music; this band speaks through the music, they live the music. Because the musicians know each other so well, having played together for more than seven years, they have developed an intuitive understanding of each others’ musical language and personality, and are able to let the music grow and take off in new directions every night. The Quartet has toured in the US and Europe and performed at esteemed jazz venues and major European Festivals, such as the Copenhagen Jazz Festival, Aarhus International Jazz Festival, Jazz at Lincoln Center, Fasching in Stockholm, A-Train in Berlin, An Die Musik in Baltimore, and many others. They have performed live on WNYC’s Soundcheck, and their recording of “West” was selected as Song of the Day by NPR Music in May, 2008.

Anne Mette’s previous recording, the double-disc Best of the West/Many Places, was unanimously praised, with the Rochester City Paper stating that the music is, absolutely electrifying . . . adventurous tunes with plenty of room for superb solos, and NPR commenting that, Few other arrangers can deter schmaltz when putting strings to swing. And even fewer possess her sense for dulcet harmonies and exquisitely developed form. Rarer still is the mind that could put it all together in a way that proclaims itself as the work of an improvising musician. Beauty may be hard to find in jazz, but as Iversen proves, that doesn’t mean it’s dormant in familiar elements, waiting to be expressed. JazzTimes Magazine stated that, Anne Mette Iversen shows a masterful reach across jazz and classical music in “Best of the West” . . . Leaving the strings behind for the second disc, Iversen’s group alternates between forceful postbop themes, aching ballads and darting, slippery grooves, and Allmusic.com was equally emphatic, saying that, Both discs are a creative success, and both are enjoyable demonstrations of what Iversen has to offer as an acoustic bassist, composer, producer and arranger.