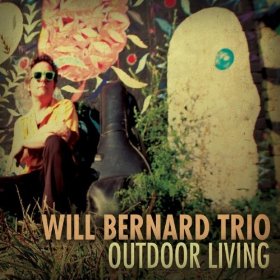 The life of a touring jazz musician doesn’t involve a lot of what most people would picture as “the great outdoors.” Guitarist Will Bernard’s groove-heavy new organ trio CD Outdoor Living, however, pays tribute to an entirely different kind of landscape. Roads stretching to the horizon viewed from the windows of a van, the cracked pavement of city streets, motel parking lots – this is the scenery that Bernard brings to light on these nine original tunes.

That life is the main context in which Bernard has bonded with his long-time touring trio of Hammond B3 wizard Wil Blades and versatile drummer Simon Lott. With home bases sprawling around the country – Bernard in New York, Blades in Berkeley, California and Lott in New Orleans – hitting the road is the only time when the three get together. But that hasn’t prevented them from crafting a unique, volatile sound together.

Outdoor Living is the trio’s recorded debut and showcases the stylistic range they discover within a very traditional instrumentation and the time-tested soul- jazz sound. “It’s a classic format like a string quartet or brass quintet,” Bernard says. “I like the amount of textures and sounds you can get in a small group, and it’s nice to have a three-piece where you can get a big sound.”

That big sound bursts forth out of the gates on the New Orleans second line shuffle of “Nature Walk,” which forefronts Lott’s insinuating Big Easy groove. Despite the tune’s evocation of an old-fashioned boogaloo organ vibe, Bernard’s scything rock-inflected guitar solo hints at the wide range of influences that become even more pronounced as the album progresses, from the Stax-era soul burner “Morgan Deux” to the abstract electronica influences on “6B” or the cinematic psychedelia of “Point Blank.”

“That’s just my nature, I guess,” Bernard shrugs, implying that this genre- hopping fusion is less about ambition than absorption. “I think it covers a lot of ground.”

Groundation, renowned rock eccentric Tom Waits and myriad others. He was also a member of the ground-breaking group T.J. Kirk (alongside Charlie Hunter), whose second album, If Four Was One, was nominated for a Grammy in 1997.

Bernard’s solo debut came in 1998 with the quartet disc Medicine Hat, followed in 2000 by Motherbug and then the 2004 trio session Directions To My House with bassist Devin Hoff and drummer Ches Smith. His Bay Area all-stars disc Party Hats served as something of a sendoff to Bernard’s native coast, as 2007 found the guitarist heading east to his new home in Brooklyn. His most recent release was 2008’s Blue Plate Special, which boasted a stellar quartet including John Medeski and Stanton Moore. The move to New York proved to be a welcome change that saw his musical opportunities accelerate while the opportunities for that west coast outdoor living precipitately declined.

Bernard initially met Lott while in New Orleans for the city’s renowned annual jazz festival, where the two immediately hit it off. “He’s really stylistically wide- ranging,” Bernard says of the drummer. “He can play the traditional New Orleans style, different types of funk and hip-hop, but is also well-versed in jazz. He’s interested in all kinds of music, so he fits well with my eclectic interests.”

The guitarist’s relationship with Blades dates even further back, to his Bay Area days. “He’s one of the best organ players out there now,” Bernard says. “It’s interesting because Will is more of a traditional player – he studied with Dr. Lonnie Smith – and while Simon draws from tradition he’s always exploring how to take it further. So there’s an interesting contrast between the two of them.”

The chemistry Bernard has formed with Blades and Lott is evident throughout Outdoor Living, whether it’s the deep-pocketed, bright-hued rocker “Implitude,” inspired by the band’s regular appearances at jam band festivals, or the Crazy Horse grind they build around Bernard’s gravelly, Neil Young-inspired axe tone on “Nooksack.” That song was named after a town in Washington state that is a regular signpost on the band’s travels, yet another reminder of life on the road – as is the freewheeling “Roaming Charges,” which references not only cell phone bills but all the other consequences of the musician’s nomadic lifestyle.

These irony-tinged song titles emphasize the difficulties of life on the road, which Bernard readily admits “might be a strange way to live your life.” But the results of that life, the tight interplay and deep sense of communication that can only come from a hard-touring unit, pays off amply on this stirring, high-energy collection.