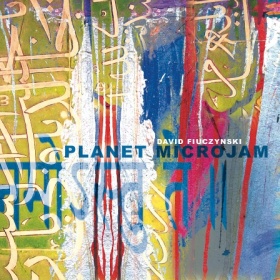 “…Fiuczynski’s prodigious technique [uses] a myriad of processed tones. He percolates, warbles, wails and generates, in
the end, some jaw-dropping moments.” – JazzTimes

Combining his ongoing interests in microtonality, jazz harmony, ethnic folk melodies and groove, guitar visionary and Berklee College of Music educator David “Fuze” Fiuczynski has arrived at the global crossroads on Planet MicroJam, his audacious and mesmerizing debut on RareNoiseRecords. Drawing on the influence of classical composers and microtonal pioneers like Julian Carrillo, Alois Haba and Ivan Wyschnagradsky, Fuze adds in his own unique flavors, inherent sense of groove and improvisational daring on fretless electric guitar on this cutting edge release that takes his Planet MicroJam® concept to the next frontier.

Going the microtonal route is the culmination of Fuze’s longstanding interest in the “notes that fall between the cracks.” As he told Anil Prasad in Guitar Player magazine: “In Western music, microtones represent all intervals in between the semitones of the 12-note-per-octave system. But in many world musics, the grid is much smaller. Turkish music roughly operates on nine notes per whole tone and Arabic music roughly uses quartertones with 24 notes per octave. American blues players will for example milk the area between the minor 3rd and the major 3rd or between the 4th and sharp 4th. These notes tend to be what are referred to as ‘blue’ notes.You don’t find those notes, or microtones, on a piano. So you can think of microtones within Arabic or older Chinese music as being Eastern blue notes which are really beautiful and affect me in the same way the blues does.”

While microtonal music is nothing new for nontempered instruments like violin or various reed instruments, it is a fairly new phenomenon for guitar. And what Fiuczynski is pioneering with the use of his custom-made double-neck (fretless and fretted) axe, his quarter-tone guitar and his trusty whammy bar is nothing short of astonishing. Not only has he mastered a vocabulary of notes that fall between the cracks, he’s also melding those elements in a Western improv/groove context. “I’m trying to be the Gauguin of fusion,” says Fuze, who is currently director of the Microtonal Groove Institute at the Berklee College of Music. “I very much think in colors. That’s a big thing for me. I want to create music that sounds like a Gauguin painting… an extremely colorful mix of Eastern and Western elements. And for me, the music on this new record is that.”

The opener, “Micro Emperor,” is Fuze’s North African Funk flavored take on a fragment of Beethoven’s Fifth Piano Concerto, which aficionados also refer to as The Emperor. Dennard puts up the percussive power underneath this dynamic jam. “Mystic Microjam” is a bit of soulful, slow-groovy funk that has the leader, violinist Radler and pianist Lebedev stretching out in audacious fashion. “Meditacion,” featuring Jack DeJohnette on drums and Lebedev on piano, is based on a quarter-tone string quartet by Mexican composer Julian Carrillo. A dreamy take on Sun Ra’s “Sun Song” is followed by Fuze’s “Horos Fuzivikos,” a driving, Middle Eastern flavored jam with rock underpinnings, courtesy of Dennard’s muscular drumming.

“Drunken Longing,” a striking solo guitar piece with programmed percussion, is based on two traditional Chinese melodies while “Madoka Blue” has Fuze carrying a Middle Eastern flavored line over DeJohnette’s swinging 3/4 groove. “En Secreto” is another Fiuczynski arrangement of a Carrillo quarter-tone string quartet piece. “Green Lament” is a stirring Arabic influenced solo guitar piece with lots of fretless inflections. “Apprehension” is a beautiful vehicle for Radler’s most bracing violin work of the session while Fuze floats behind him with volume pedal swells before unleashing on his double neck guitar. “Ragaku” is an atmospheric piece with Chinese inflections and the bonus track, “Haba Jam,” is based on Suite for Quarter-tone Piano No. 6, Op. 88+ – I. Allegro, a 1926 composition by microtonal pioneer Alois Haba.

While Fuze’s fretless guitar may sound ethereal and otherworldly at times, or ‘out of tune’ by Western standards, there’s a definite method to his microtonal madness. And he’s pushing the envelope even further on this latest recording. “What’s different is I’m also taking those microtonal notes and stacking them into chords. That’s something that nobody is doing, certainly not in the jazz-groove realm.” He says of his current musical explorations on Planet MicroJam: “I’m realizing that the inflection I really like is a Silk Road continuum – Arabic, Turkish, Indian and East Asian. That’s the way the Silk Road went. I really love the embellishments from that journey, and the melodies. This is the stuff that really turns me on. And it presents a lot of exciting new possibilities.”

Back in 1959, Ornette Coleman made a bold statement with his revolutionary The Shape of Jazz to Come. More than 50 years later, Fiuczynski’s Planet MicroJam may indeed be the shape of jams to come. As he says, “Hopefully one day, microjam will not just be a noun but a verb…something you do. Thirty years from now people might be in the studio or at a rehearsal, trying to decide on an arrangement for something. And they’ll say, ‘Should we bop this out? Should we funk it up? Maybe we should microjam it?’ Even if they reject the tuning system that I’m using, they can still use the concept to organize their musical ideas. So that’s something I’m very excited about.”

An unorthodox composer and improviser, Fiuczynski was listed in Guitar Player magazine’s “101 Unsung Guitar Heroes.” Born in Newark, New Jersey, his family moved to Germany when he was eight years old and remained until he was 19. He studied at Hampshire College and later New England Conservatory, where he was exposed to microtonal music by saxophonist-mentor Joe Maneri. While living in Boston he toured and recorded with George Russell’s Living Time Orchestra. After moving to New York in 1990, he apprenticed in the bands of pianist Muhal Richard Abrams, bassist Santi Debriano and drummer Billy Hart before joining Me’Shell Ndegeocello’s band, appearing on her acclaimed 1993 debut, Plantation Lullabies. There followed a stint in drummer Ronald Shannon Jackson’s Decoding Society before he teamed with keyboardist John Medeski for their cutting edge 1994 collaboration, Lunar Crush, which contained his earliest microtonal experiments.

In 1995, Fiuczynski recorded his own iconoclastic band Screaming Headless Torsos and toured with the band through the ’90s while also recording with the punk-klezmer group Hassidic New Wave. His wildly eclectic 2000 album JazzPunk included twisted, non-tempered covers of tunes by Pat Metheny, Duke Ellington, Jimi Hendrix, Chick Corea, Frederic Chopin and John Phillip Sousa, all executed on his custom-made double-neck guitar. In 2003, he began exploring microtonal music with 5-string electric cellist Rufus Cappadocia in their exotic Eastern-inflected-Balkan-inspired-punk-funk-hip-hop power trio Kif, which they documented on their self-titled debut released that year. Fuze followed a few years later with a different lineup and a more masterful command of his fretless guitar on 2008’s Kif Express. In 2007, he began working with the accomplished Japanese keyboardist Hiromi, touring in her four-piece fusion band Sonicbloom (he appears on two Telarc studio albums, 2007’s Time Control and 2008’s Beyond Standard). In 2010, he joined the Jack DeJohnette Group, touring internationally with the NEA Jazz Master and appearing on the drumming great’s 2011 release, Live at Yoshi’s. Fiuczynski is a full-time professor at the Berklee College of Music and is currently working on his 2011 Guggenheim Fellowship. His most recent release as a leader is 2012’s Planet MicroJam, his RareNoiseRecords debut.