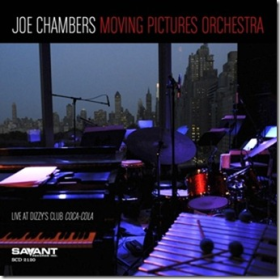 Joe Chambers has been described as one of the great drummers to come out of the ’60s — a master of dynamics, percussive color and polyrhythmic density. Also a master of all mallet instruments, piano and a composer, he has performed with most of the modern jazz giants, including Freddie Hubbard, Eric Dolphy, Donald Byrd, Charles Mingus, Wayne Shorter, Chick Corea, Sonny Rollins, Dizzy Gillespie and the Max Roach M’Boom Ensemble. Chambers has recorded close to 300 albums as a sideman and 10 as a leader.

Joe Chambers, the composer, has scored soundtracks for several Spike Lee films and it is his composing and arranging talents which are spotlighted in his most recent album. The skillful arrangements and his imaginative use of orchestral color certainly places Joe Chambers as one of the most creative and versatile men in jazz today. The stellar ensemble, recorded live at Dizzy’s Club Coca-Cola features top New York jazz and studio musicians such as Craig Handy, David Weiss, Conrad Herwig, Xavier Davis and others.

With the Moving Pictures Orchestra, Joe Chambers displays a passion for jazz that reaches far beyond the confines of the studio or bandstand, beyond genre and characterization, beyond even the music and extends into the culture itself.