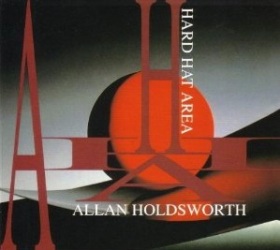 Bookended by the quasi-orchestral compositions Prelude and Postlude, the music on Hard Hat Area was in some respects simply a logical extension of the ultra-sophisticated and highly idiosyncratic style of jazz-fusion that Allan Holdsworth had developed on his previous seven albums. But in other respects it was quite different, perhaps the most significant difference being that it was recorded by the guitarist’s touring band, which had refined the material by performing it live before entering the studio. ”It was more of a band record than my previous two, which were almost more like solo records,” says Holdsworth.”

When recording Hard Hat Area, we played almost everything together in the studio, whereas on those other albums I recorded a lot of the tracks on my own, and then we added the bass and drums and other instruments afterwards.” The band is Gary Husband on drums, Steve Hunt on keyboards, and Skuli Sverrisson on bass. Originally released in 1993 and now remastered for this digipak reissue. -[Amazon Editorial Review]-