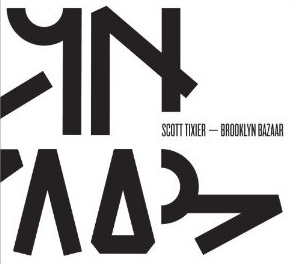 It’s a new day in music, some agree, some may not. As we move through the axiomatic wave of sonic transitions musically we meet an abundant of charismatic new voices along the way. Born in Montreuil, France this self-taught violinist & composer Scott Tixier debuts with an extraordinary recording fittingly titled “Brooklyn Bazaar” on Sunnyside Records. In the meantime, Tixier is currently residing in what it described as the most livable, challenging and culturally diverse region in the Big Apple in the borough of Brooklyn.

Right away Tixier doesn’t waste a moment he opens with the first of nine originals pen by him with an odd-metered tempo tune titled “Keep in Touch.” Timing, voicings and rhythm is prevalent in the core of music giving the ensemble generous amount space to stir up an infectious groove. Drummer Arthur Vint and bassist Massimo Biolcati lead the way by in-fluxing their own angular evenness, cadence and unique harmonics are joined by one of the most prolific new voices on violin Scott Tixier.

Of course living in NY gives any aspiring musician a myriad of opportunities to stretch, develop and foster their creative imagination artistically. Therefore, Scott is taken full advantage as demonstrated throughout this amazing project.

Early on Scott was trained to play the piano and percussion and then switched to play his beloved favorite the violin. His twin brother Tony also an accomplish musician plays the piano. Blessings seem to fall in his lap of the talented Scott he received additional tutelage by these unparalleled visionaries and jazz violinists Florin Niculescu, Jean Luc Ponty and Mark Feldman.

With kudos by fusion icon Jean Luc Ponty, I couldn’t resist the idea of diving deeper to pay closer attention to not only Tixier’s skillset but the depth, motivation and quality outlined in his compositions, structure and voicing. As a matter of fact, this is evident on “Bushwick Party,” Tixier and the crew swings into overdrive on this vibrant yet fusionistic groove which harvests their inspiring and percussive energy by feeding off of one another’s distinctive sounds via their solos generates infallible interplay that’s undeniably tantalizing.

The ensemble seamlessly changes pace with the stimulating pulse of “Arawaks” along with the illuminating effects of “Elephant Rose” ascend radiantly showcases his diversity as composer and the bands ability to reframe their illustrious stamina on “String Theory.” Their impelling wave of energy reminded me of the importance balancing the art of song structure with tempo, bravura and dexterity.

The intense “Miss Katsu” inspired by saxophonist Kenny Garrett is caged by unwavering symmetry which swings and leaps abound with melodic enthusiasm. Produced by Rob Mosher, this recording is full of welcomed surprises, for instance “Facing Windows” propels with captivating tones and illusive colors paint an expansive picture of Scott’s unblemished vision as a composer. Throughout, guitarist Douglas Bradford adds his uncanny yet ardent approach with his assertive solos compliments Tixier’s contagious artistry as a violinist.

You’ve probably heard the phrases “iron sharpens iron,” on this collaborative effort among his cohorts they are not only armed with impressive talent their anchored to attractive and complex compositions scored by Scott Tixier are brilliantly explored and executed by them.

The finale leaves us with two engaging tunes “Shopping with Mark F,” for one wraps itself around a tapestry of cool jazz meets classic and fused with fragments of improvisation exhibited to give way to their harmonious aptitude as players is the most adventurous piece. Get this, “Roach Dance” concludes the session it dribbles with a melting pot of pearls instilled in the rhythmic passages lyrically underscored in the body of this wondrous template of compositions by Scott Tixier this among all songs here are indeed well-worth the time spending with. Recommend by Rob Young | Urban Flux Media | Review