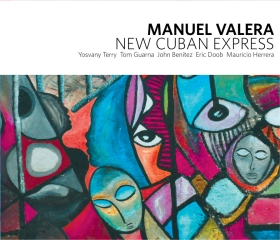 Over the years it’s been commonplace for me to spent endless hours listening to inventive and prolific jazz musicians. In this case, Cuban pianist and composer Manual Valera comes to mind. He is undoubtedly one that I frequent his body of work on any given opportunity. His latest project, “NEW CUBAN EXPRESS” is comprised of modern post-bop, adventurous and compelling compositions are embedded with these essential ingredients to seize and retain the attention of discriminating jazz and Latin Jazz aficionados globally.

Since my initial encounter with Latin Jazz during the seventies, I was and still am ecstatic by the array of colorful textures, rhythms and percussive tones that are embellished. With that said, it’s difficult for me just to walk away from a chance to be seduced by this captivating music. Manual Valera although unknown to a lot of jazz lovers, he offers these elements and much more in the context on this brilliant tapestry of compositions.

Currently based in New York, Valera gives us a savvy collection of music and begins this excursion with the vivacious “NEW CUBAN EXPRESS.” The first of thirteen songs, through his creative imagination along with his infallible ensemble they exceed the sound limit as he taps into the well of his Afro-Cuban roots to explore without boundaries and to exalt them with a plethora of cascading notes, rhythms and melodies.

Valera’s wondrous dexterity on the keys is mind-blowing, his fingers move with gracious mobility outlined in a solo context with unrivaled fluency on “Into to Upwards.” The interlude here aligns impeccably with a whirlwind of harmonious motion entangled in the fabric of fusion induced riffs erupts on “Upwards.”

The truly amazing aspect about his music it hurdles over various peaks with unyielding velocity, case in point he scores “Choices.” Manuel cleverly layers threads of polyrhythmic beats as an injection to induce his imaginative spirit as a composer speaks with potency and pronounced Afro-Cuban flavored arrangements throughout. Accompanied by his superb ensemble Manuel slows the tempo with the mellow and soulful “Me Faltabas Tu’.”

The crew gets down and funky with the riveting attributes of “Regards,” the tempo here leaps with contiguous melodies and rhythmic unison employed by this incredible ensemble celebrates his native music matched to the reoccurring theme of jazz sandwiched and layered evenly to stretch his explorative voice.

“Poly” dances with a suave Latin samba stays in sequence of providing engaging and entertaining music. On this piece, Valera’s chops are reminiscent of the legendary Chick Corea. The congas showcased on “Intro to Gismonteando” features percussionist Maurico Herrera. His voice flirts with the dramatic, tempestuous and enchanting “Gismonteando.” Also featured is guitarist Tom Guarna, the distinguished John Benitez on bass and drummer Eric Doob demonstrate why they were picked as gladiators for this provocative journey in jazz.

Percussionist Herrera sizzles once again, this time by playing the bata on a selection simply titled “Interlude.” Deeply and equally rooted in his native language of Latin and Jazz, Valera’s accessible style and technique is truly enjoyable to listen too. His zeal to envelop and infuse the origins of both influences is a pattern that is realized on the enthralling dynamics engraved in “Cinco Contra Tres’.”

The plush “Danzon’” arrives near the end of the session is an expression of Manuel’s romantic voice yet it builds successfully into a mouth-watering Latin excursion. Lastly, Manuel Valera scoops up another dose of funk he constantly bathes in the body of his Cuban roots his voices roars on the scintillating “Makuta” featuring Yosvany Terry on saxophone artistically preserves the fragrance of this piece within the realm of jazz.

With his sixth offering under his belt, the phenomenal Cuban-born pianist-composer Manuel Valera leaves no stones unturned with probing tenacity he clings onto his ethnicity and relentlessly chops away like any noble warrior of his craft. Valera swiftly illuminates his prowess, gift and talent with pure genius to instinctively step to the plate and swing for the fences with “New Cuban Express” and scores another grand slam.

Produced by Manuel Valera [All compositions and arrangements except track 5 by Jose Antonio Mendez and track 7 by Emiliano Salvador] – Mavo Records, 2012

For more information about Manuel Valera check him out at www.manuelvalera.com/live/ and Facebook.com