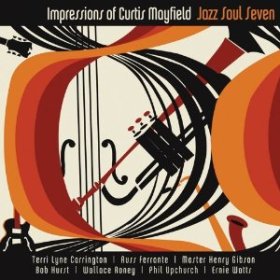 There were numerous legendary and unsung artists that climb their way to the top of the music charts nationally and internationally during the sixties. The multi-faceted soul music icon Curtis Mayfield was one of them. Mayfield humbly who stood tall among the giants in the industry and paved the way for an army of inspiring singers-songwriters.

Mayfield was considered the cornerstone of Chicago Soul with his signature falsetto vocal style charm and memorable songs like Gypsy Woman, People Get Ready, and Keep on Pushing that he recorded with the fabulous Impressions. It was only a matter of time before he moved onto to re-invent himself as a solo artist and soon developed a new flavor of soul, creative funk, and movie soundtracks like “Superfly” in the seventies.

When “Impressions of Curtis Mayfield” recently landed in my mailbox, to my surprise and marveled at the beauty, simplicity and artistically complex music that awaited my ears. Usually, I don’t get too excited with tribute albums but this one is special because this homage to Mayfield addressed the need to honor an artist of his caliber was long overdue. His clairvoyant storytelling style is shaped with definition, knowledge and incalculable impressions.

Many of us intimately we know him as the “Brother darker than blue,” fans near and far truly miss this wonderful artist. Music fans simply admired the pearls of wisdom that flowed generously from the lips of his eccentric, soulful & prolific style. Yet he yearned to speak in these poetic tones to give encouragement and exalt the souls of humanity with prophetic messages that penetrated the walls of clouded minds, souls and spirits of the oppressors through the art of song.

With Jazz Soul Seven at the helm of this project, “Impressions” features and all-star cast of who’s who in the world of jazz! Producers Brian Brinkerhoff and guitar master Phil Upchurch enlisted the matchless and stellar voices of Terri Lyne Carrington, Russ Ferrante, Master Henry Gibson, Bob Hurst, Wallace Roney, Phil Upchurch and Ernie Watts stamped their signatures on twelve inveterate and rich songs by the unequaled artistry of Curtis Mayfield.

The concept by the producers to envision a task of this magnitude is truly remarkable, their expertise and approach to Mayfield’s music from a jazz perspective was pure genius. If you’ve followed his immeasurable contribution to music fans then you should know Mayfield’s gift for communicating with the African American community surpassed the naysayers’ ideology of how music should be presented to the masses during his reign as statesman in popular music.

Mayfield amazingly wooed audiences with love, unity, expressions of freedom and his heart melting compassion for his people and fellow brethren demonstrates why he was dearly loved by all who knew him artistically through his music and personally.

The context of Mayfield’s music in most cases would be almost untouchable, yet this ensemble’s unexpected interpretations of these timeless classics are naturally expressed as if Mayfield himself reimagined this collection as a new creation in the form of jazz for a totally new audience to appreciate.