Greetings jazz aficionados, I hope all is well with you on this fab Friday! Funny thing, time truly flies when you’re having fun. With that said, the summer heat making its way through the peaks and valleys of the southern states all the way to the west coast and just think spring hasn’t even made its debut yet. As the music continues to blossom, I just wanted to take a moment to thank you guys for making “The Urban Flux” part of your jazz journey. Without you and the music this journey in this crazy world of blogdom would not be worth traveling! Until next time, be safe, blessed and do have a great weekend. —Rob Young | Urban Flux Media 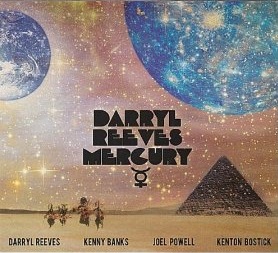 Darryl Reeves was born in Jackson, MS to a musical family. He grew up in Miami, and quickly adopted the alto saxophone as his instrument. Moved by hip-hop samples originating from jazz, Reeves was led to being influenced by Charlie Parker and John Coltrane. Reeves graduated from Jackson State University with a Bachelors in Music Education, and subsequently released The Activator (2002), a straight-up gem that solidified his place as an emerging player. Reeves then completed his Masters of Music at the University of New Orleans.

In 2004, Reeves released the funky and playful Diary of a Bandstand, to ample acclaim. It featured Russell Gunn and Robert Glasper and cemented Reeves’ reputation for presenting a new outlook on the sound, style and production of jazz music. Currently a senior faculty member at the Art Institute of Atlanta, his expertise in audio production has expanded his creative and technical approach to music.

He has toured and recorded with notable artists including Roy Ayers, Frank McComb, Julie Dexter, Kirk Whalum, Jill Scott, Russell Gunn, Angie Stone, Toku and most recently, Janelle Monae & B.O.B. Reeves is at work on his next album, a vivid blend of jazz-funk, inspired by Herbie Hancock and other 1970s jazz musicians.