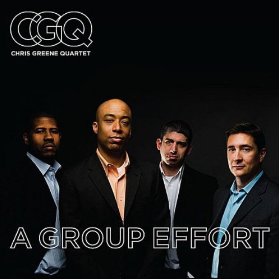 It’s been awhile since I’ve had the pleasure to immerse myself into one the most preeminent, funky, soulful voices in modern jazz saxophonist, composer and producer Chris Greene. It’s not by accident the Evanston, IL native meticulously fuses every strand of his being into the heart, body and soul of this music amplified through conduit of his latest project simply titled “A GROUP EFFORT.”

As a youngster, the saxophonists at the age of 10 sharpen his skills with his band playing cover tunes by acts like the iconic Dave Matthews Band. At a glance, this is a great beginning for an aspiring young musician to draw from a variety of influences to enviably weave these essential ingredients together to create an organic, rhythmically intense and soulful sound.

When I first heard “Merge” by Greene in 09, his fervent and commanding tonality immediately got my attention. At this point, I begin to see why music enthusiasts claim Chicago’s vibrant jazz scene is considered the premier spots in the mid-west for admirable players and phenomenal live jazz sessions. Even today, I’m truly impressed by the power and finesse of Greene’s incomparable voice and spontaneous sound reminds me of when I originally heard the legendary Cannonball Adderley’s “Mercy Mercy Mercy” back in the late sixties.

No doubt about it, out of the box with “Introduction by William Kurk” stirred my curiosity to hear this infallible quartet kick off the first of seven originals with “Bride of Mr. Congeniality” on this masterful live recording. The creative artistry of Greene’s prodigious tone spreads through the room and captures the imagination of this sophisticated audience of jazz lovers with his harmonically tight, funky and probing grooves accelerates without any annoying bells, whistles or artificial flavors added.

Deemed a maverick in Chicagoland, versatility is an integral part of Greene’s compositional landscape. The vigorous samba “Shore Up” proves why jazz lovers admire his rigid and amenable sound. Conceptually this gem provides plenty of space for ensemble to slow the tempo with their cohesive interplay. In essence, this demonstrates the beauty involved stretching this tapestry with an unyielding ambience is underscored by the stings of acoustic fibers breathes life into this composition.

The mid-range harmonics are aligned evenly to interconnect sonically and melodically evolve on the twelve plus minute “Future Emperor of Evanston.” Moreover, the ensemble inhabits a unique prowess with the ability to raise and expand collectively from their innate knowledge of jazz at any given moment petitions the listener to dive into the chamber of their grueling solos and be totally satisfied with the result.

There’s no bones about it, the enriched and insistent grooves of “Stat” is the centerpiece of this flavorsome palette of sounds. Greene soulfully plays soprano and Damian Espinosa on keys (electric) compliments his voice is a match made in heaven. In the meantime, “Three and Six” appears after the solid solo by bassist Marc Piane on “Bass Intro to Three and Six.” Greene’s warm and poignant tenor showers the soul with genuine moans expressed through his supreme resonance at any moment screams for repeated listens.

Concluding the set is the infectious Latin rhythms and sassy melodies of “Blue Bossa,” this jewel is undoubtedly one of the main attractions. The multifaceted Chris Greene developed his musicality by grooming his skills with desire, talent and education. Through his post-modernist exploration with musicians and blending styles Greene crafted his signature to unmatched perfection over the years. By having this opportunity, this helped shape his platform through a range of ideas as his newest offering “A Group Effort” illustrates why this gives him a vantage point to draw new listeners and retain the stable of his unwavering fanbase into the core of his tangible music canvas.