“One of today’s most prolific and adventurous tenor saxophonists. A master of extended techniques with a robust tone, his supple embouchure and intrepid virtuosity facilitates a wide range of expression.” – Troy Collins, All About Jazz

Listen to Exclusive Streaming Tracks From The Passion According to G.H. and The Foreign Legion

Deep into a period of startling creative output, tenor saxophonist Ivo Perelman now releases not one but two recordings – both of which underscore his mastery of free improvisation and his command of his instrument’s hidden resources; and each of which embroiders a thread from his voluminous past catalog. 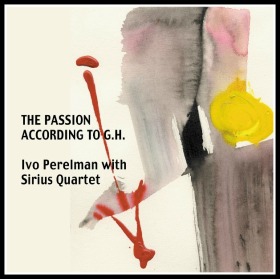 Ivo Perelman with SIRIUS QUARTET, The Passion According To G.H.

On The Passion According To G.H., Perelman has recorded with the Sirius Quartet; this remarkable string ensemble comprises top-drawer classical musicians who also have the rare ability to improvise at the level demanded by Perelman’s concept. In so doing, Perelman recapitulates his previous foray into string-quartet music (The Alexander Suite from 1998), but brings the potential of this collaboration to new heights of development. Despite the fact that sizable passages sound pre-composed, with the string quartet seeming to frame or echo the saxophone solos, the album is entirely improvised by all five musicians. As veteran jazz writer Neil Tesser says in the liner notes, “. . . Perhaps the most remarkable aspect of this album is this: not one note of it was written in advance.”

The uncannily cohesive nature of the music would seem to belie that claim, but, as Perelman explains, “Sometimes, I would start playing; or I would say to them, ‘OK, you start’; or we would start together – or we would say, ‘Well, the tape’s rolling, we should play.’ Not all musicians are born for this; some are born to interpret Mozart, and that’s a wonderful gift, too. But these are highly skilled conservatory musicians who are also mad improvisers.”

Meanwhile, the simultaneous release of Perelman’s trio album The Foreign Legion spins a rich tapestry from another, more recent thread. On it, Perelman continues the invigorating and illuminating project in which he partners with various combinations drawn from his acclaimed working quartet (pianist Matthew Shipp, bassist Joe Morris, and drummer Gerald Cleaver). Like the previous Family Ties, this new album features two-thirds of that band’s rhythm section – but not the same two-thirds. Cleaver remains on drums, but for The Foreign Legion, bassist Joe Morris takes a seat, with pianist Matthew Shipp taking his place in the trio.

The result is a wildly different sound and substance from the previous disc. As Perelman has explained, “I was so pleasantly surprised [with the quartet] … I decided I want to explore my relationship with each member of the band. I realized that I was dealing with a quartet; but I was also dealing with a trio, and a duo, and another duo – it would become a different band each time one player would drop out for a while. Each occupies such a deep space that when he’s missing, it opens everything up so much.”

The greater surprise lies in how the inclusion of piano, contrary to conventional wisdom, seems to further propel the saxophonist’s inspired quest for musical freedom. Explains Perelman: “Since the piano is a harmonic instrument, you would think that would limit the choices, but with Matthew it does not. He has this inherent rhythmic structure to his playing, but it’s very free. It doesn’t restrict my thinking; it expands and contracts.” The result is a series of exquisitely detailed trio tracks, widely varied in content, but each similarly intense and satisfying.

As he has done on several previous discs, Perelman has consulted the bibliography of Brazilian novelist Clarice Lispector for the titles of these albums (and in the case of The Foreign Legion, the name of each individual track as well). Lispector, who died in 1977, is revered throughout Latin America, but especially in Brazil, for her use of the Portuguese language and for the philosophical implications of her fiction, which has left a major influence on Perelman’s music.

Born in 1961 in São Paulo, Brazil, Perelman was a classical guitar prodigy who orbited a series of other instruments before finally gravitating to the tenor saxophone. His initial influences – cool jazz saxophonists Stan Getz and Paul Desmond – could hardly have presaged the galvanic, iconoclastic improvisations that have become Perelman’s stock-in-trade. But those early influences helped shape the romantic warrior at the heart of his most heated musical adventures.

In 1981, Perelman entered Berklee College of Music in Boston, where he focused on the mainstream masters of the tenor sax, to the exclusion of such pioneering avant-gardists as Albert Ayler, Peter Brötzmann, and John Coltrane – all of whom would later be cited as precedents for Perelman’s own work. He left Berklee in 1983 and moved as far from Boston as possible – to Los Angeles, where he studied with mainstream vibraphonist Charlie Shoemake, at whose monthly jam sessions Perelman discovered his penchant for post-structure improvisation. “I would go berserk, just playing my own thing,” he explains now.

Emboldened by this approach, Perelman began to research the free-jazz saxists who had come before him. In the early 90s – shortly after recording the first of the nearly 40 albums now under his name – he moved to New York, a far more inviting environment for free-jazz experimentation, where he lives to this day.

Critics have lauded Perelman’s no-holds-barred saxophone style, calling him “one of the great colorists of the tenor sax” (Ed Hazell in the Boston Globe); “tremendously lyrical” (Gary Giddins); and “a leather-lunged monster with an expressive rasp, who can rage and spit in violence, yet still leave you feeling heartbroken” (The Wire). The Passion According To G.H. and The Foreign Legion bring to 18 the total of albums Perelman has recorded for the Leo label.

The Passion According to G.H. Track Listing: