“I called the great French violinist Jean-Luc Ponty and I said ‘So, who’s the new cat? Who’s got the stuff? And he said Zach Brock.” – Stanley Clarke 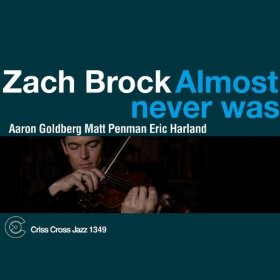 One of the most virtuosic and emotive voices of contemporary jazz violin, rising star Zach Brock has drawn praise from a wide cohort of fellow musicians and critics for his musical acumen.

Having appeared notably as a sideman with musicians such as Stanley Clarke and Patricia Barber, Brock convenes a world-class rhythm section for his Criss Cross debut (pianist Aaron Goldberg, bassist Matt Penman, and drummer Eric Harland), who inspire him to uncork a series of efflorescent, graceful improvisations on a program of originals and re-imagined standards.