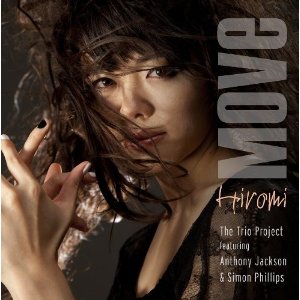 In 2011, winning the first Grammy Award in the “Stanley Clarke Band featuring Hiromi Uehara” album participation. In addition, the Japanese artist performances alone achieved a week for seven consecutive years and unprecedented in the “New York Blue Note”. On April 30, including participating as the only Japanese artist will be held at the General Assembly of the United Nations Conference in New York in commemoration concert “International Jazz Day”, the activity on a global scale this year both in name and reality enters the Hiromi Uehara continue. Listen to samples ….

Appeared with the long-awaited second volume of the world’s best player was formed in the “Voice” a previous work, that Anthony Jackson ~ Simon Phillips by “The Trio Project”! Previous work for the “ups and downs of the emotional voice of the people’s hearts” was the concept, work is now represented by the sound the “flow of emotion go with the flow of time moving.”

Hiromi Uehara of all original all 9 tracks on this disc. Opened with “MOVE” is the title song of angry waves surging groove followed by piano, such as alarm alarm clock which announces the beginning of the day, the last until “11:49 PM”, along the flow time of day Weaving music is played as a soundtrack. Evokes many emotions harbor where the sights and meet during the day, colorful and vibrant soundscape.

Combination of ironclad was buoyed by a sense of trust absolute unique trio after the “Voice” Release the previous work, has been touring the world over one year, envelops the listener with a sense of scale such as the orchestra and the overwhelming power You. -[Excerpt | Universal Music Japan]-