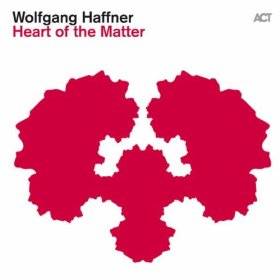 Wolfgang Haffner, HEART OF THE MATTER

The title “Heart of the Matter” by Wolfgang Haffner’s new album is definitely more than a play on words a matter of the heart -. Therefore “a matter of the heart” – his job for Germany was highly decorated, winning among others the Echo Jazz 2010 drummer, since He began his career with 18 years in the band of Albert Mangelsdorff. The following work for numerous national and international stars and the participation of over 400 albums testify. But only since he as ACT artist makes his own albums, he feels the “heart of the matter” close: “I no longer feel only as a drummer, but as a universal musician. I compose, arrange, search and enter worlds of sound, which is ultimately my style. ”
Accordingly, “Heart of the Matter” is a logical extension of the way, the Haffner has taken with previous works, “Shapes”, “Acoustic Shapes” and “Round Silence”: Again, it comes to organic, resting in itself music with supreme Groove, substantial melodies, full of color and space. “I’ve found a sound for me that suits me. And yet it is from time to time forward a bit. This time I have discovered new possibilities of the instrumentation and the integration of voice, “said Haffner. It may be that a change of scenery while also playing a role. Haffner had been “Round Silence” composed mainly of Formentera, so he lives in Ibiza since 2010. “If you are sitting there on the beach, then come the moods, inspiration comes from myself.” Easy to understand, then, how it comes to the titles “Nacho” or “Iceland Life” that frame the ten tracks on the album almost symbolic. -[Biography | Excerpt – “Translated”]-