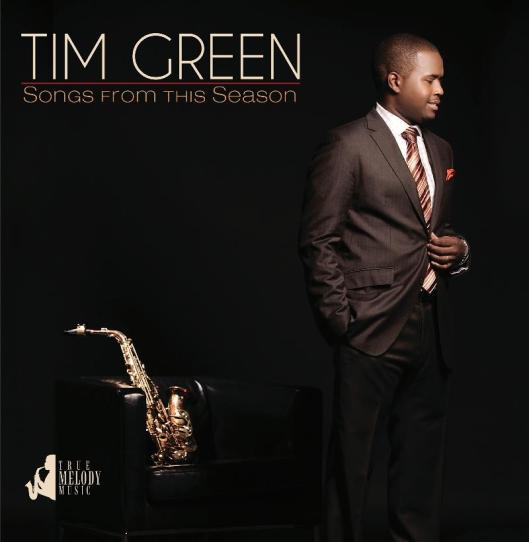 TIM GREEN, Songs For This Season

“Tim Green is a dynamic musician. If you make a checklist of everything you’d want in a musician, Tim has it all.” – Christian McBride

“Green’s a player to watch…fully capable of emerging as yet another of the artists who have used a second or third place finish in the Monk competition as a springboard to outstanding careers.” – JazzTimes

“Tim Green is one of the brightest saxophonists on the scene. He combines the tradition with forward-thinking sensibility and makes a substantial statement. Keep your eye/ear on Tim!” – Bob Mintzer

Stream (3) Tracks From Songs From This Season

Whether your source is the Bible or the Byrds, the notion is the same: “To everything there is a season.” On his debut as a leader, Songs From This Season, alto saxophonist and composer Tim Green recounts the many seasons of his own life on a stylistically diverse set featuring a host of established and rising jazz stars.

The disc marks not only the emergence of a strong new voice on the saxophone, already established by Green’s second-place showing in the 2008 Thelonious Monk International Jazz Saxophone Competition, but of a confident and versatile composer. Each piece on the album, Green says, reflects a certain period in his life and the emotion attached to it.

“I can never force a piece of music,” he explains. “It has to be inspired by a mood or emotion I’m feeling at that moment.”

While his compositions display the influence of many different genres, the common thread among them is a direct emotionality, a vivid communication with the listener. This quality was inspired by some of Green’s mentors, most prominently Dick Oatts, with whom he studied at the Manhattan School of Music, and Terence Blanchard, one of the guiding lights of the Monk Institute.

“Dick Oatts really introduced me to writing,” Green says, “and Terence Blanchard encouraged me to not just write music but to write an actual song. So many jazz records are just about the solos, but I wanted mine to be more about the songs and the melodies.”

That determination is evident from the outset, beginning with the lyrically spiritual opener “Psalm 1,” which Green describes as “a prayer or a blessing over the whole album.” The Biblical theme continues into “Siloam,” a steely 12-bar blues in 10/4 featuring an inspired solo by Hekselman. Another reference to the Good Book can be found in “Philippians 4:13,” a resolute ballad inspired by a particularly challenging period in Green’s life, one in which the titular scripture provided solace.

While Green was raised in the church, gospel was not a significant aspect of his musical upbringing. He grew up in Baltimore surrounded by music; his father and uncle are singers and his older brother was a trumpet player who Green emulated. “My brother was one of my first influences because I just wanted to be around him and do whatever he was doing.”

Still, a song like “Shift” shows a distinct gospel influence, albeit one that entered Green’s vocabulary later in his career. Upon moving to New York to study at the Manhattan School, he was enlisted by fellow Baltimorean Marvin Thompson for his Mo’Horns brass section, which backed gospel stars like Fred Hammond and Richard Smallwood. “I never planned on playing gospel music,” Green admits. “But all of a sudden I was playing with all of these gospel artists and it started having an influence on my music.”

On “Dedication,” Green pays homage to two more of his influences, pianists Mulgrew Miller (one of Green’s mentors) and Kenny Kirkland. Miller has called Green “a talented, committed, and accomplished young artist. And most importantly to me, he has a song in his heart.” The endorsement of such elders spotlights Green’s role as a torchbearer for the modern jazz tradition.

Through Miller, Green has recently come under the wing of one of his idols, saxophonist Kenny Garrett. On the phone with Miller one day, Green was shocked when the pianist handed the phone over to Garrett out of the blue. “I was really blown away because he’s a big hero of mine,” Green recalls. “Since then he’s been really supportive and just lets me know he’s on my side. He wants me to go all the way, and that’s really encouraging to me.”

More recently, Green has also gotten bandstand endorsements with several heavy hitters who have called upon him as a sideman. The list includes Miller, but also bassist Christian McBride, pianist Eric Reed, and the Carl Allen/Rodney Whitaker group.

While his own compositions are the focus of the album, Green also revisits seasons connected to songs by his forebears. He tackles Wayne Shorter’s burning “Pinocchio” in a trio format with Kris Funn and Rodney Green, and shows his more tender side on Billie Holiday’s classic “Don’t Explain.” As Green explains, “I wanted to put one standard on the album, and that was one that I could really relate to in terms of the words and the melody at the time.”

From the chilled-out haze of “ChiTown,” dedicated to Green’s wife, to the intense, rock-influenced “Time For Liberation,” inspired by director Spike Lee, to the elegiac “Lost Souls,” Songs From This Season explores the many moods and emotions of a lifetime, ending with the aptly-named “Hope.” There couldn’t be a more appropriate note on which to conclude this promising and artful debut.

The Music of Tim Green from Boat Safety Films on Vimeo.

The Music of Tim Green – EPK

All dates to feature the Tim Green Group unless otherwise noted.
Personnel for each date varies.

* With the Carl Allen Quartet