Phenomenal soul/jazz singer Gregory Porter’s “Real Good Hands” off his dynamite Motéma Music release Be Good, has received a Best Traditional R&B Performance nomination for the 55th Annual Grammy® Awards, broadcasting live from the Staples Center in Los Angeles on Sunday, February 10, 2013. This marks Porter’s second Grammy nomination. His first was in the Best Jazz Vocal Album category for Water, his breakthrough debut album (a rare feat), which was released in 2010 and featured the international hit “1960 What?“.

“Gregory Porter is…not only a powerful new voice in jazz, but…undoubtedly the real deal with unbridled staying power in the realm of pop, soul and gospel as well.” –The Urban Flux 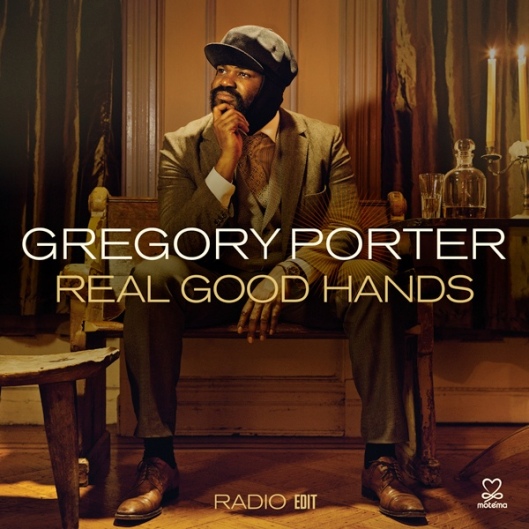 The heavily buzzed Be Good has surpassed expectations of fans and critics alike, many of who hail it as even better than the critically acclaimed Water. Writes All About Jazz, “If Water heralded the arrival of the next big name in vocal jazz, then Be Good makes it clear that Porter still has plenty to say”. On “Real Good Hands” Porter speaks from the heart as the soulful spirit of the ’70s, epitomized by such artists as Lou Rawls and the Chi Lights, echoes forth in style.

Be Good debuted at #1 on the iTunes Jazz Album Chart in both the U.S., U.K. and Norway, and climbed to #6 on the Billboard Jazz Album Chart. Porter made history when iTunes selected “Real Good Hands” as it’s first song by a jazz artist to be featured as the Single of The Week. Following this Starbucks featured “On My Way to Harlem” as its Pick of The Week and Porter’s visage began cropping up on magazine covers internationally. Porter has spent much of the year traveling the world from venue to festival in support of the album, packing rooms at every stop on the way. Needless to say its been an incredible ride and an incredible year!

Motéma Music congratulates Gregory Porter on his nomination, his achievements thus far and the many good things that surely will continue to come his way!

“he’s really a soul singer with an acoustic jazz combo backing; a legitimate heir to Lou Rawls.” – Something Else

“One of my favorite cuts on the album is the Bill Withers-esque “Real Good Hands,” a slice of classic-sounding ’70’s soul music..” –SoulBounce