There are snapshots in the family photo album of Grace Kelly at Scullers Jazz Club at the age of six, falling asleep in her father’s arms. When she began studying saxophone at the tender age of ten, she dreamed of one day performing on that very same stage. In those childhood visions, it was a much older Grace Kelly that she envisioned on the bandstand, but she made her Scullers debut at thirteen and held a CD release concert there the following year.

These days, the Boston club is a second home for Kelly, where she is a top draw for her regular performances. She claims to have set a record for the number of times she’s sat in with headliners there, ranging from David Sanborn to Steve Tyrell to Ann Hampton Callaway. And she has her own dedicated seat at the bar, although she’s still a few months away from being legally able to order a drink.

All of which made it a no-brainer to choose Scullers when the saxophone prodigy decided to record her first live album. “It was the perfect place to record a CD,” Kelly says. “I knew if I was going to do a live CD I wanted to have a really great audience. Having grown up in Boston and developed a fan base there since I was twelve, it literally sounds like a yelling, hooting stadium when we come on stage at Scullers. People are just so enthusiastic, and I feel with this audience I can do whatever I want.” 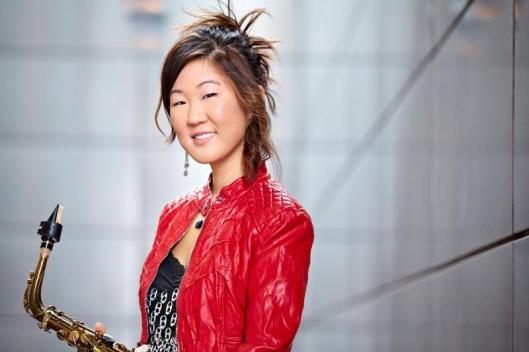 On Live at Scullers, Kelly offers a set mostly composed of new material which shows off her remarkable versatility. Her sax chops have been granted the imprimatur of jazz elders like Phil Woods and Lee Konitz, both of whom have recorded with her. But here, Kelly’s instrumental virtuosity shares the spotlight with her winsome voice via her most song-oriented collection to date.

“I listen to a wide range of music, from Miles Davis to John Mayer,” Kelly explains. “Lately I’ve been listening to more contemporary music and songwriters and at the same time I’ve been more inspired to write songs. Growing up and learning the saxophone, I always listened more to singers than instrumentalists. Whenever I play a standard I always make sure to know the lyrics behind it. I feel like words are a really big connection between myself and the audience.”

Kelly boldly offers her mission statement on the opening track, “Please Don’t Box Me In.” The title plea is made by a gifted musician and songwriter who sees no reason why the music she makes should be more single-minded than the music that she enjoys.

“As a young person,” she says, “I love the tradition but I also I listen to the radio. So I’ve been trying to figure out how to meld some of this contemporary stuff with jazz in a different way. I’m like a mad scientist in my laboratory experimenting.”

Those experiments have resulted in a stunningly diverse set of songs. The repertoire on Live at Scullers ranges from the smoldering “Night Time Star” to the tender “Autumn Song” to the country-tinged ballad “Kiss Away Your Tears.”

Live at Scullers is by no means a complete break from Kelly’s jazz roots, however. “Searching for Peace” is a scintillating burner, and the set closes with two familiar standards, both of which the saxophonist has recorded in the past. “The Way You Look Tonight” is reprised from Man With the Hat, Kelly’s last record, which featured the legendary saxophonist Phil Woods. And the evening draws to a funky close with her groove-oriented take on “Summertime,” which she previously recorded in a completely different arrangement on her 2006 album Every Road I Walked.

The band that took the stage that February night features a blend of old and new collaborators. Trumpeter Jason Palmer has been a fixture of Kelly’s line-ups for the past six years, and their easy, empathetic interplay is evident throughout – as is their playful camaraderie. On “Searching for Peace,” Kelly can be heard bursting out in laughter as Palmer begins his solo by quoting the theme from Sanford and Son. “We’ve gotten to the point where it feels like when we play together we’re reading each other’s minds,” Kelly says. “It’s so comfortable to communicate with him on stage musically.”

Guitarist Pete McCann is a new addition, replacing the usual piano spot in Kelly’s band. He also doubles on ukulele for “Falling” and “Ready, Set, Stay,” a love song about a lazy day under the covers penned by Kelly and Emily Dale, a friend from Berklee College of Music.

Kelly recently graduated from Berklee at the age of 19, and the school provided many of her bandmates for the gig: cellist Eric Law (whose birthday was on the same night, resulting in a brief quote of “Happy Birthday” from Kelly on “Searching for Peace”), backing vocalists Jaime Woods and Chantale Sterling, and bassist Zach Brown. Drummer and Berklee professor Mark Walker – who, like Brown, plays regularly with Cuban clarinet master Paquito D’Rivera – rounds out the ensemble.

And, of course, there’s the Scullers audience, which provides a character of its own. “The thing that’s different about creating a live CD for me is the fact that I’m thinking about how I can program the set for my audience,” Kelly says. “It’s not so much about the album or the concept, and it’s not only about how we can feature ourselves. But how can we capture the energy of the audience and more importantly connect with them?”

The answer, in Kelly’s case, was to make the kind of personal, engaging music she’s been making for most of her life. For the audience at Scullers – not to mention listeners to this CD – that’s more than enough.

All tracks composed by Grace Kelly (unless otherwise noted)