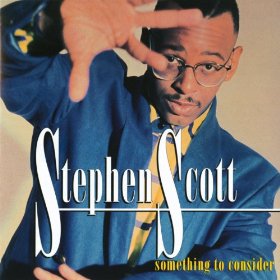 Stephen Scott, SOMETHING TO CONSIDER [2013]

“When I play, I’m told I’m very intense,” Verve pianist Stephen Scott said recently. “That’s because I’m not out there to gimmick or show off technique. I’m playing to get to the meat of the music. To be honest. That’s what Betty Carter always told me, ‘be honest’.”

Clear acknowledgement of his promise, his honesty, his awakening genius, Aminah’s Dream continues the brilliance. As with Something to Consider, released in ’91, Scott wrote the majority of the compositions for this recording. Eventually a trio date (augmented by horns) Aminah’s Dream features the eternal duo, bassist Ron Carter and drummer Elvin Jones. Called upon to lend their knowledge, power and support, Scott admits, “In writing the music for this date, I had them in mind.” The admiration is mutual – when they finished the session, Jones was so impressed he said, “I’d love to take him (Scott) home with me!”

Quite an affirmation for a young man only 24. But then Betty Carter called Scott a genius at 18. In fact critics and fellow musicians have raved about Scott’s talents since he won the Young Talent Award from the National Association of Jazz Educators in 1986. -[Biography | Excerpt]-