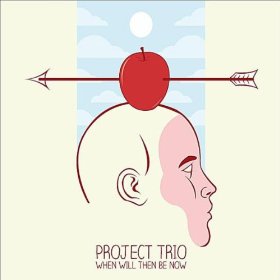 Project Trio, WHEN WILL THEN NOW

PROJECT Trio is taking chamber music to a whole new level. Greg Pattillo, flute, Eric Stephenson, cello, and Peter Seymour, bass, are pushing the boundaries of chamber music with a high-octane mix of classical, jazz, hip-hop, and rock. The Trio performs to enthusiastic audiences of all ages in concert halls, clubs, and classrooms around the world. Acclaim for the Trio and its members runs the gamut from Downbeat Magazine, which praises PROJECT Trio as “packed with musicianship, joy, and surprise” to the New York Times, calling beatboxing flutist Greg Pattillo “the best in the world at what he does.” The Wall Street Journal hails the group’s “wide appeal, subversive humor and first-rate playing.” END_OF_DOCUMENT_TOKEN_TO_BE_REPLACED

HEAR in NOW is a collaborative trio performing primarily original jazz-tinged avant-classical compositions. Originally brought together in the winter of 2009 by an Italian concert promoter for the WomaJazz festival in Salsomaggiore Terme, Italy, the trio, feeling a great sense of musical chemistry, have since kept the momentum going. Residing in three separate locales, the women of Hear in Now bring together elements from their indivIdual regions for a unique sound experience by exploring free improvisation along with through-composed pieces. END_OF_DOCUMENT_TOKEN_TO_BE_REPLACED

Pure genius, brilliant, prolific, and virtuoso master pianist, composer and musician Chick Corea delivers another enthralling recording once again! For all of you that’s followed his career you might agree, there’s simply no one else like him! —Rob Young | Urban Flux Media

From straight ahead to avant-garde, bebop to fusion, children’s songs to chamber music, along with some far-reaching forays into symphonic works, Chick Corea has touched an astonishing number of musical bases in his illustrious career while maintaining a standard of excellence that is awe-inspiring. A tirelessly creative spirit, Chick Corea continues to forge ahead, continually reinventing himself in the process. END_OF_DOCUMENT_TOKEN_TO_BE_REPLACED

Composer/pianist/arranger Danilo Perez is arguably one of the greatest talents to emerge from South America. With “Providencia,” his current project on Mack Avenue Records Perez brilliantly sculpts a beautiful masterpiece by fusing his deeply rooted lineage of his beloved Panamanian culture and carefully blends it with the complexities of jazz and classical music to inevitably take listeners on a buoyant Pan-American global excursion like you’ve never heard before. —Rob Young

Curiosity seekers and music enthusiast alike may find this repertoire of music on the following recordings, “A Love Supreme (The Legacy of John Coltrane) & Danzón (featuring Paquito D’Rivera) by the TURTLE ISLAND STRING QUARTET ingenious and adventurous blend of European-chamber music and Afro-Latin jazz very interesting and quite appetizing exploration to dive into. —Rob Young 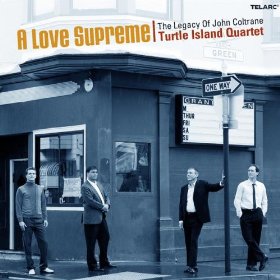 A Love Supreme: The Legacy of John Coltrane explores places where jazz and classical sensibilities converge.

Some music is so finely crafted that the genre in which it is conceived becomes irrelevant to the music itself. Such was the case with much of the work of saxophonist John Coltrane – an artist commonly regarded as a jazz composer, but one whose musical vision transcends the boundaries of what is considered jazz and what is not. Four decades after his death, Coltrane continues to inspire musicians of every perspective – not just jazz players, but any composer or performer who recognizes and respects the inherently exploratory and universal nature of music.

The Turtle Island Quartet – violinist David Balakrishnan, cellist Mark Summer, violinist Evan Price and violist Mads Tolling – are among those artists who see this bigger picture. A Love Supreme: The Legacy of John Coltrane is Turtle Island’s interpretation of music written by – or otherwise reflective of – the 20th century jazz master. The album is set for release on March 27, 2007. —Concord Music Group

Read more about this recording by The Turtle Island Quartet. END_OF_DOCUMENT_TOKEN_TO_BE_REPLACED

Guitarist, composer and producer, Marc Antoine, was born in Paris (France) on the 28th of May 1963. His parents bought him his first guitar when he was 11 years old which quickly became his third arm. Marc has had a guitar in his hands ever since.

At age 13, his father saw such rapid progress that he sent him to the conservatory where he would study classical music. By then his mentors were Andres Segovia and John Williams.

At 17 he’d already won many prizes and started showing an interest in a variety of music genres including jazz, rock, Afro, pop, and more. At the same time he was playing in local bands in Britany (France).

Tragedy struck in the summer of 1981 when his debut career got cut short by a devastating accident to his left hand. The surgeon told him that his chances of playing guitar again were very slim and next to nothing. However, through the adversity, his love and passion for music helped him overcome this tragedy and in 1984 he was back on the scene in Paris, performing in clubs and recording for artists like Philippe Petit, Charlelie Couture, Jill Kaplan, France Gall, and Ray Lema. END_OF_DOCUMENT_TOKEN_TO_BE_REPLACED

Until the arrival of “Blues Vignette,” was placed in my hands I had no earthly idea who this twenty-eight year old British pianist named Gwilym Simcock was.

“Little People” the opener, is lyrically fascinating and elegantly expressed by the imaginative play of pianist Gwilym Simcock. His imposing presence, style and arrangements are brilliantly executed on the impending suite titled “Improvisation I, II, & III.” The lush tempo of this trilogy is perfectly matched to the exquisite nuances of “Caldera” followed by the energetic “Jaco and Joe” will indeed amaze music enthusiasts globally.

By the end of the Disc 1, Simcock calls upon the gifted and classically trained cellist Cara Berridge to expand her transcending voice on the stimulating yet dramatic underlying theme of “Suite for Cello and Piano.” For a moment, while listening it occurred to me how I was forced to endure classical music “101” during my school days while in middle and high school. Funny thing, after all these years the remnants of this music finally manifested in away I can comfortably embrace what was once thought boring is now a revelation of classical and jazz infused into one unforgettable silhouette of sounds. END_OF_DOCUMENT_TOKEN_TO_BE_REPLACED

“From all the great musical control displayed on this CD, it would seem as if Collier must have an extra hand or two and therefore deserves three thumbs up” – Percussive Arts Society

Drawing from his own library of compositional works, mallet percussionist Tom Collier presents a deep and varied collection of works for marimba and vibraphone. He seamlessly weaves the timbres of the instruments on “Three Scenes for Vibraphone and Marimba,” and “Duettino Improvisando for Vibraphone and Marimba,” while “Marimba Fantastique” serves to cement both his compositional and improvisational prowess, intertwined with a deep musicality. Collier has maintained a strong professional presence for decades in Los Angeles and Seattle; from international tours, to major motion pictures, to holding the Director of Percussion Studies at the University of Washington.

The list of recording artists who have successfully rendered both jazz and classical idioms is short, but remarkable. Some that come to mind are Eddie Daniels (clarinet), Bill Watrous (trombone), Wynton Marsalis (trumpet), and Holly Hofmann (flute). Add to that list two more names: Bill Mays (piano) and Marvin Stamm (trumpet & flugelhorn). Joined on five of the nine tracks by the talented Alisa Horn on cello, they have given us an album that is hard to categorize. I puzzled over which iPod playlists to sort the tunes into – jazz? classical? easy listening?

The material is an ear-catching mix of jazz standards (“Baubles, Bangles, & Beads,” Charlie Parker’s “Ah-Leu-Cha“); adaptations of themes from Bach, Rachmaninoff, Debussy, and Gershwin; and Mays’ composition “Fantasy for Cello, Trumpet, and Piano” in three movements. All are executed with classical precision and contemporary feeling. I reacted with joy when I heard how cleverly Mays and Stamm merged Bach’s Two-Part Invention with Parker’s “Ah-Leu-Cha.” Suffice it to say that if you have any interest at all in the intermingling of jazz and classical, you’ve got to hear this. —James A. Vedda