Recently I had the honor to hear music by this amazing musician named Anthony Branker. Wow where on earth have I been? Branker’s sound is classic yet modern, it grooves, and accessible I really dig his latest “Dialogic.” Once you hear it, I’m sure you will to. –Rob Young | The Urban Flux

For his 3rd Origin recording, composer and Princeton professor Anthony Branker features his quartet, Word Play, in a set of original compositions that seek to emphasize the interactions and conversational dynamic that take place within a collective.

If you haven’t heard “Blessings” and “Dance Music” by the incredible Anthony Branker be sure and check them out! 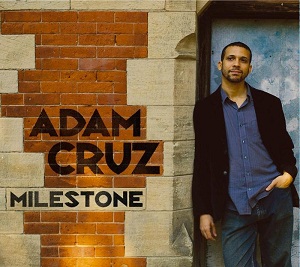 Drummer and composer Adam Cruz did not choose the title of his debut album lightly. Milestone is both a professional and personal marker.

“I’ve had a vision to do something with my composing for a long time,” says Cruz. “But I’ve also felt a certain ripening needed to happen. This is a big step for me. I’ve invested a lot of time in practicing and studying, working at my relationship with the piano and developing a compositional voice. I’ve just turned 40 and I’m happy the record is coming out now. There’s a certain amount of growth and maturity that I have gone through, deepening my dedication as a drummer and composer, particularly over the last decade.”

Listen to an exclusive streaming track from the album

Comprising eight original compositions, and featuring a true all star band including Miguel Zenón, alto sax; Steve Wilson, soprano sax; Chris Potter, tenor sax; Steve Cárdenas, electric guitar; Edward Simon, piano, and Ben Street, bass, Milestone, which was made possible by a grant by the Aaron Copland Recording Fund, marks a before and after in Cruz’s development as an artist. END_OF_DOCUMENT_TOKEN_TO_BE_REPLACED