Sonny Clark had something special in regards to his instrument: he had an identity. Like Dexter Gordon or Ike Quebec on the tenor sax, Charlie Parker or Jackie McLean on the alto, Clifford Brown or Miles Davis on the trumpet, Scott La faro or Paul Chambers on bass, and Thelonious Monk, Herbie Nichols, or Bud Powell on piano, you didn’t need a program to tell you that Sonny was on the ivory. Along with “Cool Struttin‘” this is the album that captures what Clark could do when some brass was along for the ride. Charlie Rouse, who was so superb with Monk, shows that there was none better on sax when it came to giving his pianist/leaders what they wanted. The older, lesser known Turrentine does honor to the family name, and Butch Warren and Billy Higgins are excellent as always, but an added treat is hearing the deep voice of Ike Quebec’s tenor on ‘deep in a dream’, a elegant, languid, tune whose wistful, romantic quality was tailor made for the emotional musings of Quebec.

In many ways this song reminds me of the great version of “In a sentimental mood” that was the highlight of the album Coltrane and Ellington created. In any case this is an album that has the unity of a certain mellow-cool-tone, while at the same time shows enough jagged edges beneath the smooth-liquid-surface to keep things very interesting. Sonny Clark was always appreciated in accompaniment, but personally I appreciate the opportunity to hear something of his own conception. Sonny Clark was one of the great individualists on ivory, a rare and beautiful breed. *Note: this is a review of the non-RVG edition of this album. —Todd Stellhorn/Amazon.com

And epiphany occurred last week as I was prompted to pay homage to the quintessential voices in jazz from their prosperous and influential years as recording artist during the later fifties, sixties and early seventies. I’m honored to feature this new segment titled “Classic Jazz Revisited,” which spotlights the finest musicians and recordings from legendary music labels like Blue Note, CTI, Riverside, Verve, and Prestige Records etc … as always your recommendations are welcome! 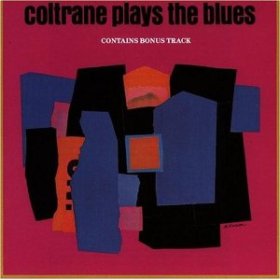 The recordings here come from the same October 1960 sessions that produced My Favorite Things, and while the all-blues album is far less famous, it’s an equivalent document of John Coltrane’s work in his earliest recordings of the quartet with drummer Elvin Jones and pianist McCoy Tyner. The all-blues format emphasizes Coltrane’s personal relationship to the form, both his emotional depth and his capacity for harmonic extension on essentially modal materials. His soprano on “Blues to Bechet” is a summoning up of the blues form’s original power, also apparent in the slow and moving “Blues to Elvin.”

“Blues to You,” played with just Jones and bassist Steve Davis, is a hot coil of sound, Coltrane’s convoluted lines twisting into new shapes while he and Jones catch every possible nuance of the beat. “Mr. Knight” would later turn into “India,” but it’s already a floating modal figure for his tenor. This edition includes the alternate takes previously available only in the box set The Heavyweight Champion. —Stuart Broomer

The Philadelphia-born trumpeter and superb bop stylist Lee Morgan apprenticed with Dizzy Gillespie and Art Blakey before emerging as a leader in his own right in the early ’60s for Blue Note Records. Although Morgan owed a stylistic debt to both Gillespie and Clifford Brown, he quickly developed a voice of his own that combined half-valve effects, Latin inflections, and full, fluid melodies. While many of Morgan’s later sessions for Blue Note would find him paired with saxophonist Hank Mobley, The Sidewinder features then up-and-coming tenor player Joe Henderson, plus Detroit pianist Barry Harris, bassist Bob Cranshaw, and drummer Billy Higgins. Along with the title track, an unconventional 24-bar blues, the album’s compositional standout is “Totem Pole,” a minor Latin groove featuring an outstanding solo by Henderson.

This is the kind of relaxed blowing date, invigorated by thoughtful performances, that forms the backbone of the Blue Note catalog. —Fred Goodman/Amazon

Join yours truly and listen to two of the greatest voices in jazz. The bold and vibrant timbre of saxophone legend John Coltrane binded to the warm and intimate vocals of Johnny Hartman joined at the hip to blend a unique volume of soulful classics and arrangements like no other, before or after them … is a definite plus for any music enthusiast. The Urban Flux

This is one of the three all-ballad albums that John Coltrane recorded in late 1962 and early 1963. Johnny Hartman was apparently Coltrane’s suggestion, and his deep, dark voice meshes perfectly here with Coltrane’s tenor. The material is well-chosen, including definitive readings of “My One and Only Love” and “Lush Life.” McCoy Tyner fills out the chords, augmenting the harmonies and keeping the tone of these ballads respectful but not overly sentimental.

All the players get to the deep structure of the songs and are not afraid to play in the most essential and elegant manner. This is beautiful jazz. —Michael Monhart

TVOne has a quarterly award winning series called “Unsung,” which airs on Sunday evenings during that period. Furthermore, when I hear the innovative, visionary and planetary sounds of true renaissance players like saxophonist Courtney Pine from Great Britain monstrous tonality and Trane influence echoes perfectly within the restrains of under appreciated artists. Perhaps, it’s the media’s fault or is it that we really haven’t heard jazz until you’ve listen to masterful voice of Courtney Pine?? ~ The Urban Flux

Courtney Pine’s second album stays very much within the Marsalis-imposed boundaries of post-Miles post-bop; indeed, a Marsalis brother, Delfeayo, is the producer, and the album’s subtitle uses the patented kind of wordplay that the New Orleans dynasty indulges in. As before, Pine’s guiding star is John Coltrane, of whom he had become a fervent and skillful acolyte, tossing off endless streams of heated playing on tenor and soprano inside and outside. Pine also uses alternating expert teams of English acoustic jazz specialists — Julian Joseph or Joe Bashorun on piano, Paul Hunt or Gary Crosby on bass, and Mark Mondesir on drums — as backup.

There are some really good Pine compositions here; “Sacrifice” sounds as if it could have made it as a standard in mainstream and/or electric jazz. Although the novelty of a young black Englishman playing Afro-American acoustic jazz has long since worn off, much of this CD repays repeated latter-day listening. —Richard S. Ginell

Joe Lovano pulls in an experienced pianist, James Weidman, and a young rhythm section of Esperanza Spalding on bass, and Otis Brown and Francisco Mela on drums for “Folk Art“. Unfortunately, the mix puts the bass and drums in the back, so even though they’re doing good stuff back there, you don’t tend to notice without focusing on it. The good news is that Lovano is in fine form, and Weidman is very good. The songs are all originals, and mostly good. Lovano resists the urge to be too crowd-pleasing and plays in a way to reward some concentration.

One exception is “Dibango“, which features the aulochrome, a horn with a buzzy, distinctive tone. The melody gives instant gratification, in contrast to the more cerebral stuff. This is very solid, serious, mainstream jazz worth recommending. —Anthony Cooper 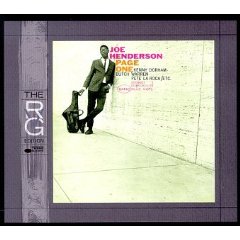 This 1963 session was Henderson’s debut as a leader, and it introduced a strikingly individualistic tenor saxophonist, with a distinctively muscular sound and approach, as well as a talent for finding a personal route through the dominant tenor styles of Sonny Rollins and John Coltrane. At the time of the session, Henderson worked regularly in a quintet with the veteran trumpeter Kenny Dorham, and the two enjoyed a special chemistry apparent on several Blue Note recordings under their individual names. One unusual facet is the hard-bop take on the then emerging bossa nova, apparent in the first recording of Dorham’s now standard “Blue Bossa,” on which Henderson’s thoughtful construction is apparent, and the saxophonist’s own coiling Latin tune, “Recorda Me.” Pianist McCoy Tyner, bassist Butch Warren, and drummer Pete LaRoca provide more than solid support for a date that’s as often reflective as it is forceful. —Stuart Broomer 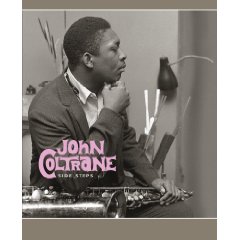 The artistic prowess of saxophonist John Coltrane was so expansive and influential – even in his own short lifetime, let alone in the decades since his death – that it’s difficult to quantify or differentiate his significance as a leader, a collaborator, a sideman or any other role in the jazz idiom. What’s certain, though, is that some of his most pivotal session work took place on the Prestige label in the 1950s.

Over the past three years, Prestige Records has released boxed sets of Coltrane’s numerous sessions from the mid- to late ’50s, each spotlighting a specific dimension of his tenure with the label. Fearless Leader – released in September 2006, in celebration of Coltrane’s 80th birthday – showcases his recordings as a bandleader. Interplay, released in September 2007, contains Coltrane’s early collaborative recordings with a variety of stellar musicians from the same era.
END_OF_DOCUMENT_TOKEN_TO_BE_REPLACED

As you know, John Coltrane’s music is revered as supreme among the giants in jazz. Honestly, I haven’t always been comfortable listening to his music because of his immeasurable improvisational skills were simply beyond my ability to ascertain his compositional palette. That said, a personal revival has taken place for me as I’ve matured in learning to appreciate the language of jazz by artists of this glorious era. Enjoy your weekend … ~ The Urban Flux

This set is drawn from a February 15, 1967, recording session–one of John Coltrane’s last days in the studio. The tapes had been in Alice Coltrane’s care since the recording, and she gave titles to the pieces, overseeing their release on CD in 1995. All are previously unreleased with the exception of “Offering” which appeared on Expression. As on that release, there’s evidence here that Coltrane’s relentless musical search was drawing him ever further out. The performances are shorter, focused, with a magisterial lyricism seamlessly integrated with exclamatory shrieks and cries. There is an aching, though rough-hewn, beauty to Coltrane’s playing on these tracks. With the exception of “Tranesonic” where he is on alto, he plays tenor sax throughout. His command of the instrument from the very bottom of the low register to the stratospheric heights of the altissimo is staggering–note in particular his “duet” with himself on “Sun Star” where he questions and answers with himself on the extreme ranges of the horn. There’s a depth and wisdom to these recordings that only further extends the Coltrane legacy. —Michael Monhart

On September 8th, the Concord Music Group will release the next installment of the popular Rudy Van Gelder Remasters Series of classic Prestige albums. This 13th edition of the RVG series includes three more classics that engineer Rudy Van Gelder originally recorded in the 1950s and recently upgraded to 21st century standards of digital audio. The new remasters bring the total number of releases in the series to more than 60.

Originally recorded under the supervision of Prestige owner and founder Bob Weinstock, each of the three remasters is a fascinating slice of jazz history – a vivid portrait of ambitious and innovative young artists in their formative years, all of whom have since become iconic figures in the annals of American jazz: